The 5 Keys to Off-Season Training For Goalies

In the age of overloaded information we live in, the focus has now turned to gaining an edge over the competition. Information is no longer as valuable as it once was, only action is truly valuable.

And, just like any other hockey player, us goalies tend to be a pretty competitive bunch. We’ve been told we’re weird our whole hockey lives and they even gave us our own coaches recently, mainly because most coaches just don’t know how to deal with us.

Our competitiveness paired with the loneliness of our position means we need to be extra prepared in every possible way. A defenseman or forward can often get away with the odd mistake or lazy play and not have it noticed by everyone in the rink, but the goalie does it and it’s amplified by ten. 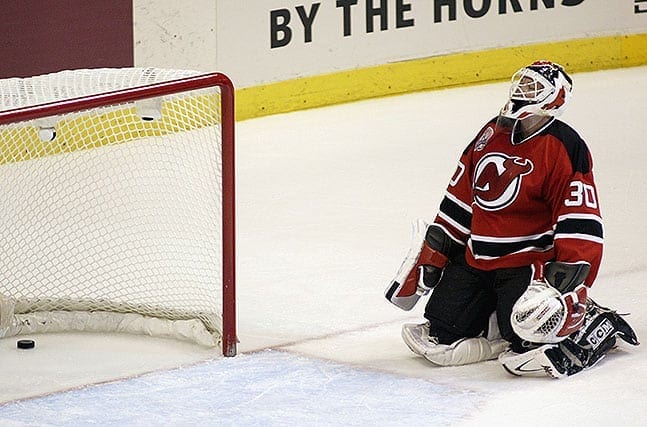 (courtesy of The Hockey News)

So, I’ve come up with a simple list of training tools for tenders that will allow you to not only compete at the highest level next season, but also ensure your injury risk is as low as possible. Stick around for the entire article and I’ll even show you how you can train using one of my programs this off-season and get a chance to win a full set of customized pads and gloves.

Now that I’ve got you all excited about the chance at a gleaming new set of goal pads, here are some keys that will help give you the best chance to win them:

1. It’s Not That Different

In reality, training for goalies and training for defensemen or forwards is not all that different, especially if you’re new to the off-ice training game. Just like anyone off the streets, the less seasoned you are in the weight room, the more likely you are to see results.

The principles of training goalies remain the same as those of training any other athlete, really. First, you need to generally prepare yourself for the intense training that’s ahead. In the first phase of off-season training, you need to focus on correcting imbalances, cleaning up injuries and nagging issues from last season and becoming a more efficient mover.

Next, you need to build the foundation upon which everything else will be built—strength. In the maximum strength phase, the focus is on adding more weight to the bar and keeping pristine movement technique as the load gets heavier and heavier. You’ll add dense, athletic muscle that will allow you to tap into all the other factors that go along with becoming a better, stronger hockey player.

Finally, we’ll take that newfound strength and layer some athleticism, explosive power, and speed on top of it. This is the only phase where goalie training differs a little from other hockey players, as you’ll need to focus more on lateral and rotational power due to the nature of movement around the crease.

So, don’t think you’re not getting the special treatment you deserve if your program looks similar to the top scorer on your team for most of the summer, but do make sure you run through the necessary checklist I’ve laid out. If you’re not training with my program, these are some things you should look for in a coach or program.

As a now-32-year-old goalie who plays once a week, I can tell you first hand the importance of making sure your hips are healthy and happy, even if you’re still a young buck. I wrote about hip stability for hockey players here last week.

These are all movements happening directly at the hip when a goalie makes a butterfly save and lateral push. And none of these, especially when they’re put together like this, are common movements at the hip for 99% of people.

A mentor of mine and about 100,000 other strength coaches, Eric Cressey says, “It’s more about durability than ability.”

How can you put up league-best numbers if you’re on the shelf with an injury? How can you expect to perform your best if your left hip is barking at you every time you try to seal the post?

That’s not going to lead to more saves and certainly not more wins.

So, we should stretch more, right?

I’ve written this here before, but stretching is not always (and often is not at all) the answer to “tightness”.

Often times, “tight” muscles are disguising a lack of stability in a joint. It’s a protective mechanism that our bodies automatically kick into that ensures we don’t put ourselves in poor situations or overstretch at a joint.

But constant stretching won’t fix it.

Mobility is defined as range of motion combined with control throughout that entire range of motion. Because what good is the splits is you can’t apply it under stress without highly risking an injury?

This is where smart programming comes into play. Not only will you learn to create tension and stability in your joints throughout every movement, but we’ll sprinkle in some highly effective active mobility techniques that will have you feeling better – and more exhausted – than any stretch ever has.

Build stability within the hip joint. Learn to move it through a full range of motion under control. Use a variety of double leg and single leg exercises to ensure the hips can work alone and together.

3. You Must Train Laterally

I touched on this above, but let me expand and tell you exactly why you need to add in some lateral strength training as well as lateral speed and explosiveness work. 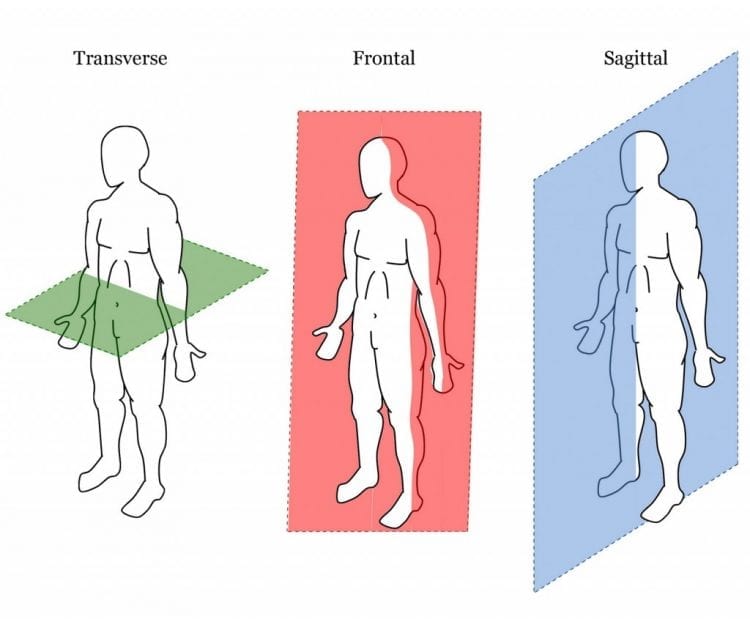 So you need to prepare the muscles and the joints to move in all of those directions. You need to be strong, stable and explosive in 360 degrees.

This is why the “Own The Crease” program includes lots of movements in the frontal and transverse planes as well as combinations including rotation (as you’ll see below) that will build a bulletproof athlete from head to toe and from all angles.

This is especially important for goalies and where most goalie vs. skater programs differ. Even though skaters will move laterally and skating does not happen only in one plane of motion, goaltending is almost all lateral movement and rotation. Very rare is it to see a goalie moving forward and backward a whole lot (at least not a really good one).

These types of things have been addressed and baked right into the program you’re about to learn more about, but if you’re not using it, remember to train in all three planes of motion to best prepare yourself for your time in the crease.

4. Integrate All Your Rotation

Much like the lateral training example, nothing in sports – hockey in particular – happens in just one plane of motion and most of getting from Point A to Point B in the crease involves some form of rotation and needing to couple the shoulders and hips together in one fluid motion.

The body needs to work as a unit if you want to accomplish any rotation as fast as you need to in a game, transferring power from your lower body through your core and into your upper body. Then, you need to have enough control that you can stop the powerful rotational forces and be able to make a save.

Lots going on that can absolutely be trained and improved over the summer.

It’s also important to note that this shouldn’t simply be thrown into your program anywhere because you know you need to work on rotation. In the program below, we’ll strategically build up to rotational power movements by teaching your body to resist rotation first, then rotate under control, working as a unit.

If you haven’t included movements like these into your training before, you’re leaving way too much potential on the table and, while you don’t make saves in the weight room, these basic principles will help keep you healthier for longer and improve your speed and precision around the crease, allowing your confidence to skyrocket throughout the season.

5. Don’t Forget to Train Your Brain

Every goalie at the highest level has the skills.

Every goalie at the highest level is willing to work hard.

And most goalies have some form of off-ice training program.

Training your brain and dialing in your mindset is the next frontier of goalie and athlete training. You need to be able to brush aside bad goals and continue performing. You must maintain a high level of performance throughout training camp, throughout the season and even throughout playoffs to be called the best.

All of the strength and conditioning in the world cannot replace a weak mindset that can’t handle the bumps, bruises and adversity that the game of hockey and the game of life will inevitably throw your way.

You need to exercise complete control of your thoughts. You need to become mentally tough.

And if that makes you squirm in your seat a little, that’s okay. That’s normal.

That’s exactly why you need it so much.

Within the “Own The Crease” Program, we’ll be going through a curriculum of mindset tactics that will undoubtedly take your game to the next level. Even with mediocre strength and conditioning and sub-par skills, a strong mindset will carry you to higher levels than you ever thought possible.

Take it from a goalie who did everything wrong in his career and someone who was long past his “best before” date by the time he figured out his mental game.

This is the secret sauce. This is the magic formula that not many people have.

As you can see, I highly recommend joining the “Own The Crease” program this summer to prepare you for next fall’s hockey season. However, you don’t need to join to have success.

I’m sure you’ll find some success by following these principles, hammering out some research and putting the pieces together like a jigsaw puzzle. But why not make your life easier and allow yourself to focus on the task at hand?

Instead of wondering if what you came up with is right, or even close to right, why not guarantee you have a professional program at your fingertips?

Be one of the first ten to sign up for the “Own The Crease” Program and you’ll get $50 off the summer program.

And, the part you’ve been waiting for, the greatest overall performance, which will include physical transformation, key performance indicators and social media presence, will get a chance at winning a fully customized set of Warrior goalie pads and gloves.

So, not only will you be able to walk the walk on the ice, stopping everything that comes at you—you could also be the sharpest looking tendy in the league!

Because I like the community here at Women’s Hockey Life so much, you’re the first I’m sharing this opportunity with. But after 24 hours, about 40,000 other goalies will have access to this same offer. Don’t wait for it.

If you’re interested, just CLICK HERE (or on any of the links above) for more information and to get in on the fun.