She’s worth it: The PWHPA’s impact on hockey

Recently a video by the NHL Chicago Blackhawks entitled “As Fast as Her” was released to the public. It is an 18 minute short film about the struggles and triumphs along the career path of Olympic Gold Medallist Kendall Coyne Schofield, but I’m sure many of the women who took part in the NHL All Star game event have a similar story.

The video includes a narrative by Olympian Cammi Granato who inspired a young Kendall Coyne and gave her a vision of what she could be someday and what she could accomplish. In turn, Kendall Coyne Schofield has met the goal of becoming an Olympian but strives to give something even bigger to the next generation of girls growing up playing hockey… a sense of being worthy enough to play the game without prejudices, without being called names and thought of as being “less than” because of their gender. At one point in the film she becomes emotional as she talks about this piece of her journey because it IS so important to her and it IS something that’s going to resonate with so many girls.

I remember when I was in Grade 3 or 4, my teacher asked all the kids in class what we wanted to be when we grew up. The assignment was to draw a picture of ourselves and write a paragraph about what we wanted to be and why. I drew a picture of myself as a teacher, as many other girls did. A few days later my teacher challenged us by saying “Now I want you to tell me what you would want to be if you were the other gender. Draw a picture and write a paragraph.” This was probably around 1980… a very progressive project for the early 80s.

I really struggled with this. What I would have wanted to be was a hockey player but it was hard for me to say it out loud. But why? First of all, I had never played ice hockey before but since I was already such a huge hockey fan by that age, it seemed like a no brainer when she asked the question. I had only played street hockey with the boys in my neighbourhood but I watched every NHL game I could and listened on the radio when I couldn’t get the game on TV. It still felt like a taboo thing to say, but I thought if we’re already stretching the boundaries and imagining we were another gender then it couldn’t be that out there to say “hockey player”, right? But it was. I felt like it was.

I took the project home and told my parents who asked me what my answer was. When I told them a hockey player they said, “They will never let a girl play in the NHL.” My answer was, “Well, maybe by the time I’m an adult they will.”

Aside from a few preseason games played by Manon Rheaume, this still hasn’t happened. And even the CWHL, which folded last spring, couldn’t find a sustainable business model for women to play in a professional hockey league.

Fast forward to 2019 and the PWHPA’s Dream Gap Tour is in full force. This Dream Gap Tour is a group of the most elite female hockey players in the world who have banded together to create a better future for women’s hockey. They are showing the world that women should be able to make a career out of hockey and not have to supplement their incomes by working other jobs that take away from their training and evolution to become the best athlete they can be. Traditionally, I know women are great multi-taskers, but this is ridiculous! They aren’t asking for NHL salaries, but they are asking for a way to make what they love to do and what they are excellent at doing, a feasible way to support themselves and the ones they love. 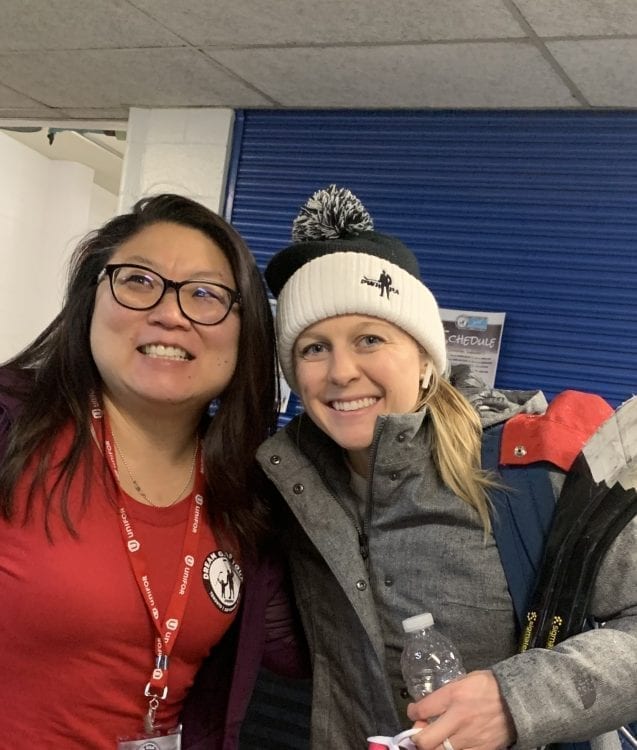 Just after Christmas I was fortunate enough to be able to volunteer in Toronto at the Dream Gap Tour games. I was just taking tickets but it was such an important day for me for so many reasons. Volunteers are often hard to come by at any event, so just being a warm body to work the games was helpful on a basic level.

I also got to meet other women who were volunteering for the event that love hockey as much as I do. I met two women who drove to Toronto from London, Ontario (that’s about three hours in the car) that morning with their hockey-playing daughters to support the event. One of them played adult rec hockey and the other one has been a dedicated hockey mom to her three daughters. Some of my women’s league teammates also volunteered with me and others showed up to watch the games with their daughters. I also got to talk to some of the PWHPA players to tell them how amazing I think they are and also thank them for just being incredible examples to us all. There were so many levels of inspiration that day.

I feel compelled to make this an important cause on the list of things that I want to contribute to in my lifetime. It speaks to me in volumes even though I didn’t grow up playing hockey or dream of a hockey career outside that one activity in 4th grade. It speaks to me because I didn’t even think I could dream about hockey as a career possibility. The dream was silenced before it was even thought of.

When I watched “As Fast as Her” I found myself crying real tears. These were not tears of regret or for the dream that never could be. These were tears of hope for all the young girls who lace up the skates and play hockey with their friends today. Just thinking about all those girls who play in a league with other girls—and boys. To them, this is a perfectly normal thing…. which it should be. What a fantastic example they have before them. What an opportunity to see themselves in all these women.

We have come a long way and there is still a long way to go but now more than ever before, those girls can see it. They can believe it. They can do it, because as Kendall Coyne Schofield assures us, “They are worth it.” I couldn’t agree more.