Six teams converged on Akureyri, Iceland from February 23 to 29 for the 2020 IIHF Women’s World Championship Division II Group B tournament, a chance to earn promotion to Division II Group A and move further up the IIHF world ranking.

As with the Division I and other Division II World Championships, this was a round robin with no playoffs, with the top three teams at the end of the event finishing as the gold, silver and bronze medallists. 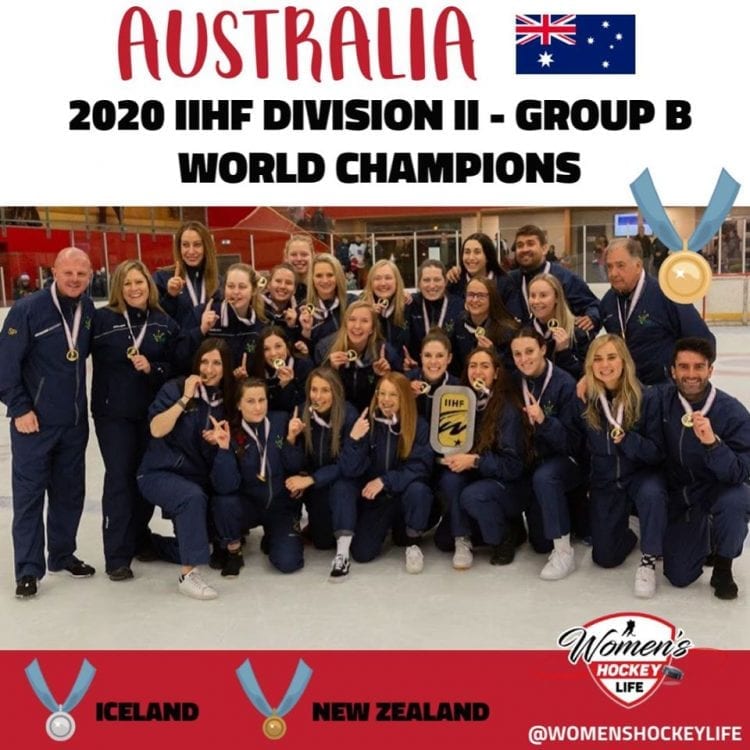 Team Australia made sure that their stint in Division II Group B was short, winning the gold medal and earning promotion back up to the Division II Group A tournament. The team was dominant offensively, with nine multi-goal scorers and three players with over 10 points, and went undefeated, winning four games by a margin of five or more goals. Goalies Olivia Last and Tina Girdler, who were both making their senior national team debut, collectively allowed just four goals against.

Host nation Iceland claimed the silver, with the team’s only loss being an opening 6-1 fall to Australia. Their remaining wins included a 6-0 shutout against Turkey and 7-0 shutouts against Croatia and Ukraine. Silvía Björgvinsdóttir was once again the team’s key offensive leader, finishing with the same number of goals (8), assists (5) and points (13) as last season and winning the Top Forward award for a third year in a row. With the loss to Australia being the team’s only downfall, Iceland was very close to winning their long awaited gold.

New Zealand wasn’t too far behind Australia and Iceland, but with losses to both teams, including a 7-1 loss to Australia to finish the tournament, the team settled for bronze. Jana Kivell did not disappoint in her first senior national team appearance, leading her team with five goals. While New Zealand was not as strong defensively and in net as they have been in the past, a highlight was seeing different faces, such as Kivell, Caitlin Heale and Hope Gregory, make big contributions to the scoresheet.

There was a significant gap between the top three teams and the bottom three teams. Turkey finished in fourth, having opened the tournament with a 3-2 overtime win over Ukraine and finished with a 5-2 win over Croatia. Despite a 6-0 loss to Iceland, Turkey lost just 2-1 to Australia and New Zealand. Goalie Sera Dogramaci played a key role in keeping Turkey close with the Oceanic teams.

Croatia scored just five goals, and the team suffered big losses to the medalling nations, including an 11-1 loss to New Zealand and a 15-0 loss to Australia. The country’s one win was a 2-1 shootout victory over Ukraine. Goalie Petra Mlinarević was undoubtedly the team’s MVP. She faced an astounding 251 shots through five games (including 90 shots in Croatia’s game against Australia).

This was just the second IIHF Women’s World Championship for Ukraine. Last year they won the Division II Group B Qualifying tournament (now called Division III), which the team will be returning to next year after finishing in last place. While Ukraine did have some tough games against the top three nations, the team’s losses against Turkey (3-2) and Croatia (2-1) were close and required extra time. Ukraine’s seven goals were scored by four players: Tetiana Chyzhova, Diana Kovtun, Daria Tsymyrenko and Yuliia Dobrovolska.