My name is Gavin McHale, and since we’re going to be spending some time together here at Women’s Hockey Hockey Life, I figure it’s best to introduce myself properly.

I’m a prairie kid at heart, born and raised in Winnipeg, Manitoba. I have seen most of Western Canada through a junior hockey bus window, having played two years in the Western Hockey League, two years in Tier 2 Junior A and another two years at the University of Manitoba.

I started working in a high performance fitness facility with youth athletes and worked my way up to training professional hockey players—an opportunity I’ll always cherish. I moved on to focus on the general population, but never moved far away from my deep hockey roots, returning to work with former elite athletes and weekend warriors three years ago in the online world over at www.mchalestrength.com.

I’m also a goalie, and have kept my foot in the door working with the goaltenders of the MMJHL’s Charleswood Hawks and, most recently helping coach the University of Manitoba Women’s Hockey Team to a National Championship in 2018. 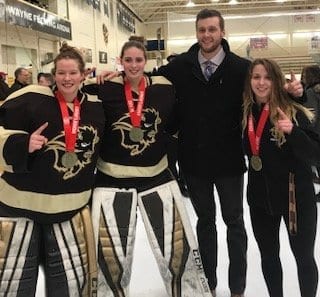 But I’m not here to tell you all about my accolades and history, even though you will find humble brags sprinkled throughout my writing.

I’m here because I know what it’s like to be confused and unhappy in the gym. I have been the athlete without a clue what to do and hating off-ice training, simply because no one took the time to properly explain its value.

I’m here because I want to help everyone from elite athletes to beer leaguers accomplish more in the gym and gain all of the benefits that go well beyond performance and aesthetics.

My hope is that my monthly articles will allow you to ask yourself the difficult questions and dig deeper into why you do certain things and how exactly they’re helping you reach your ultimate goals, whatever those may be.

But today, I’m here to teach you something.

Growing up, I was a lot like most athletes: I wanted to do whatever needed to be done to improve my game and pursue the dream of taking a sport I loved as far as I could.

I thought that meant countless hours of jogging (but I think it’s pronounced yogging – with a soft j) and hated every minute of it.

You may not hate cardio as much as I do, but you most likely believe that if you want to stay lean and improve your athleticism, cardio is the answer.

I’m here to tell you that I disagree.

While I will no doubt agree that cardio, or conditioning—the second arm of strength and conditioning, is an important piece of the off-ice training puzzle, I think that most athletes need to do more intelligent and efficient strength training.

Not enough athletes truly move well, leading to decreased performance and injuries, especially when they get older and start playing the game less and less often.

Let me tell you a story about my first job at a gym. Like I said, it was a high performance facility and we often had parents come in with grandiose ideas for how we should train their children.

This particular father came in to our initial meeting guns-a-blazing. He sat down in his power suit and had it all figured out for his young daughter, but just needed to give his money to someone that would execute his master plan.

“She needs to work on her footspeed. She needs mainly agility work—lots of ladders and sprinting. She needs to be faster if she’s going to make the top team.”

While I didn’t want to lose a potential client and I was pretty new to the job, I was encouraged by my boss to use my skills and educate both parents and athletes.

So here goes, I thought.

“I have not seen your daughter skate, but I will agree that most young athletes need to improve their foot speed, agility and skating in general. However, I don’t think the plan you’ve laid out is the best way to get there.

We have to start by building a foundation of strength and physical literacy in your daughter. We will then layer on explosive movements to improve her power. Once we feel she is prepared, we will add in speed and agility drills.

This way, her body will be able to better control deceleration, change of direction, and other movements that tend to cause injuries in young athletes.”

And I braced myself.

Much to my surprise, he sat there looking stunned. I don’t think anyone had ever talked to him like that before.

Not only was he impressed, he signed her up for the full off-season program on the spot.

It was a coming-of-age moment for me and a story I’ll never forget.

But the story is no different for you and athletes just like you. If you’re not proficient in the fundamental human movement patterns—squatting, hinging, pushing, pulling, carrying and single leg stance, then there is no way you should be flying through ladders and cones at break-neck speed.

There is a time and a place for everything, and any contractor will tell you it’s not wise to build the frame of a house without first having poured a rock solid foundation.

The coming articles will tell you more about these movement patterns, how to execute them properly and exactly how they should be used within your programming.

Hockey is a tough sport. Show me someone who says women’s hockey is non-contact and I’ll show you a liar.

Regardless of the inevitable contact, hockey is an incredibly fast moving sport and, like any sport, becomes completely unpredictable and often uncontrolled for the brain and the body.

This is an important distinction to be made along the athlete’s continuum.

Therefore, by strategically strengthening the muscles that will be used during an uncontrolled environment in a controlled setting like the gym, we can set you up for success when you don’t have the time to plan out your next move.

Think about strength training as the daily lessons and homework, practices (which are often more controlled than games) as the quizzes, and games as the exams that everyone’s been preparing for this whole time but no one really knows what the hell is going to happen.

You wouldn’t jump into a university exam without at least preparing by looking at some of the material a few times. Right?

Use the opportunity to train in a controlled environment to prepare your body for when things go completely off the rails.

Strength Training Will NOT Make You Bulky

Unfortunately, this myth just won’t die. And although you would think athletes are only concerned with their performance, this often isn’t the case.

I’ve worked with enough people, athletes and non-athletes alike, to know that underneath everyone’s “goals” are their real goals. Most of us want to look better and feel more confident when we look in the mirror.

And for as long as I’ve been in the industry, there’s been this idea that women will become bulky and ‘manly’ if they lift weights too often, so let me dispel this myth right now.

First of all, it takes a heck of a lot of work both in and out of the gym to become bulky (just ask the 6 foot 7 lanky guy writing this article). You have to be dedicated to your training and nutrition and all those extra calories you’re burning on the ice won’t help you bulk up either.

Don’t get me wrong, women can build muscle, but with the proper programming and nutrition, those muscles will be functional and lean, leading to increased performance and improved aesthetics.

If you’re into that sort of thing.

Finally, if you aren’t sold on this no cardio life, luckily you’ve chosen a sport that demands many different athletic attributes. I will never allow an athlete to skip conditioning, because it’s an integral part of the game we all love.

I’d just rather get it over with quicker than the 5-mile death marches I used to run as a teenager.

If you have any questions related to this article or strength and conditioning in general, please don’t hesitate to comment below or get in touch with me via Facebook or Instagram.

Yours in strength and (begrudgingly) conditioning,