I can only assume that by now you’ve practiced the art of diaphragmatic breathing again and again until you’ve mastered it.

Last month’s article was all about breathing, and there was a reason for that.

Like I said, if you want to be able to create more tension, move more weight and become stronger (and therefore faster), ya gotta learn how to breathe.

So, if you haven’t already, go back and check out the videos and master that before throwing around the iron, which you’ll learn about today.

You may also remember me touching on the importance of building a strong foundation in my first article for this here website, but you may have been sitting here asking, what’s next?

“I understand I need to get strong before I get fast, but how?”

I was lucky enough to start my training career at a private gym while I was still in university and essentially clueless about how to create a training program or workout (thanks a lot, undergraduate degree).

I still got some good results for myself and my clients and I could name the origins and insertions of the muscles I was training, but I never really had a method to the madness until our manager at the time and one of my first mentors, told us that we’d be doing all of our programming based on Dan John’s 5 essential movements. These included:

So, we have six fundamental movement patterns that, once mastered, will allow you to do anything you want in the gym without fear of injury and will lead to incredible improvements on the ice.

Let’s see if you’re including all of them in your programs and make sure you’re completing them with flawless form. Once you do that, we can include more power-based movements and explosive work.

Today, we’re going to talk about lower body movements, since they should make up the majority of any athlete’s programming. You can still hit the guns, but you need to move the big rocks first that will lead more directly to on-ice success.

Famed Boston Strength & Conditioning coach Mike Boyle speaks of a direct link between the weight an athlete can squat and their on-ice speed. I’m not sure if that’s ever been truly tested and I know there are many other factors at play, such as skating ability and technique, but I’m sure he’s not far off.

When you’re skating (if you’re skating well), you’re in a constant half squat position. You need to be able to drive out of this position and hold it for extended periods to maintain your technique for an entire shift or drill.

My favourite variations of the squat are Goblet Squats and Front Squats.

Goblet squats are the beginner movement pattern for squatting. Get strong at goblet squats and you won’t have many problems on the ice. This will teach you the fundamentals of a good squat, as evidenced in the video below.

Next, we come to my first true love, the front squat. Being a tall kid, I sustained two major back injuries (one that put me out for half a season) from back squatting—performing the movement with a barbell on my back.

Front squats allow you to get deeper with better form and, for hockey players and athletes of all types, translate seamlessly into learning the catch portion of a power clean or hang clean – the next step in the journey to becoming explosive.

Nothing more to see here. Throw this variation early in your training session and once you get the form down-pat, push the weight and reduce the reps.

This is the one where everyone asks, “What’s the difference between this and a squat?”

I’m so glad you asked…

If you look at an athlete doing a proper squat, you’ll notice that their shins and their torso are at essentially the same angle when they’re at the bottom.

Then, if you watch someone perform a proper deadlift from the floor, you’ll notice that they’re hinging at the hips and their lower legs are close to perpendicular to the floor, while their upper body is close to parallel (hence, the movement pattern being called a hinge). 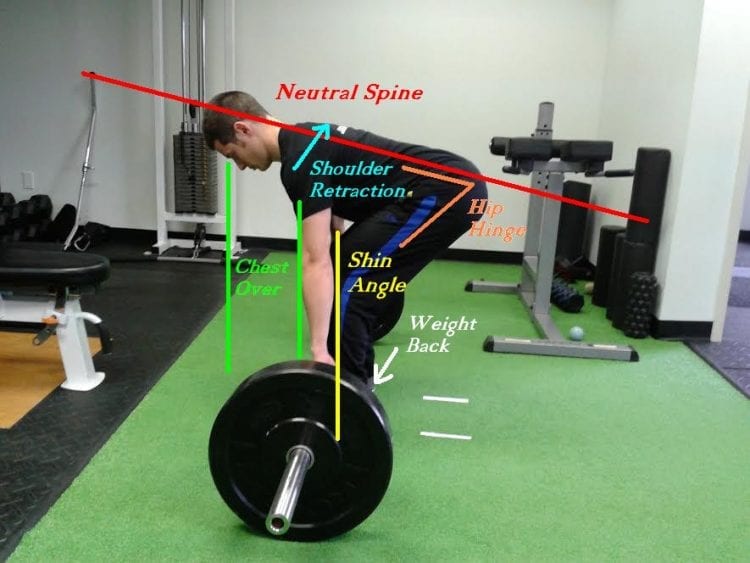 While the front squat translates to the catch of a clean, you need to be able to deadlift to perform the pull, or first sequence of a clean movement.

And while the squat will inevitably help you build a better booty, the focus is on the quads. The focus of the hinge pattern is on the powerhouse muscles of the posterior chain: the hamstrings, glutes and back.

These muscles will not only produce massive amounts of power, they’ll also protect you from injury when they become stronger.

They don’t look half bad in a pair of jeans, either.

So, my favourite movement pattern here is the basic deadlift. Once you become proficient at the kettlebell version below (you can also use a dumbbell on it’s side), you can move onto using a barbell.

If this bothers your back or you want to add more glute work into your program, consider trying out the barbell hip thrust.

While it may look funny, it produces results in the form of a muscular, powerful butt. You don’t need weight to start. Just focus on the pattern, then add some weight.

Since I’ve just finished telling you all about squats and deadlifts, it’s important to understand these movements are important for building a foundation of strength.

However, single leg movements should never be far behind in any hockey player’s training program.

By separating the legs and working them separately, we create two parts that are greater than their sum. We create two separate powerhouses that can propel the body any way it needs on the ice.

Due to differences in anatomy, female athletes have a higher incidence of knee injuries than their male counterparts. But, by using single leg work and strengthening the lateral muscles of the hips, like gluteus medius and gluteus minimus, we can reduce the chance of those pesky knee injuries.

So, it’s crucial when you’re doing any single leg work to focus on keeping your knee over your shoelaces and not letting it dive towards the midline of your body. This is true for squatting and hinging, but especially useful in single leg movements.

Finally, my favourite single leg movements include the daunted Rear-Foot-Elevated Split Squat. This is one of my favourites for hockey players as well, since you can support with your back leg, but it should be very minimal.

Another favourite is the Single Leg Hip Bridge. This is a great single leg hinge variation that really forces the glutes and hamstrings to wake up – a lacking area for many athletes.

The lower back is supported, allowing the athletes to fully focus on using their butt and hamstrings to lift their body.

There are, of course, countless variations of squats, hinges and single leg movements that can be included in your training.

Don’t get hung up on just these, but understand that these will help lay the foundation for anything else you do in the gym and everything you do on the ice.

Improve and become proficient at the fundamentals and you’ll lower your injury risk while improving your speed. Both of those things sound pretty good to me.

Yours in lower body strength,