For nine years in a row, the EV Bozen Eagles dominated Italy’s women’s ice hockey league, claiming the championship title every season from 2009-10 to 2017-18. However, their string of victories ended this past season with the rise of the Alleghe Hockey Girls.

Based in a mountain village of 1,200 people in northern Italy, the Alleghe Hockey Girls ended their team’s own 24 year championship drought (they last won in 1995) by claiming the 2018-19 Italian women’s league title in a best of three series against the Eagles earlier this year.

Alleghe has been on the verge of winning the championship several times over the last few seasons, starting with a bronze medal win in 2014-15. They faced the Eagles in the final in both 2016-17 and 2017-18, but ultimately came up short.

The 2018-19 regular season ended with the EV Bozen Eagles—who also compete in the Elite Women’s Hockey League (EWHL)—finishing at the top of the standings for the eighth year in a row. Alleghe was ranked second with seven wins to the Eagles’ 11 in 12 games.

The team’s starting goaltender, 19-year-old Elisa Biondi, had a great season with a 2.04 goals against average and .920 save percentage. 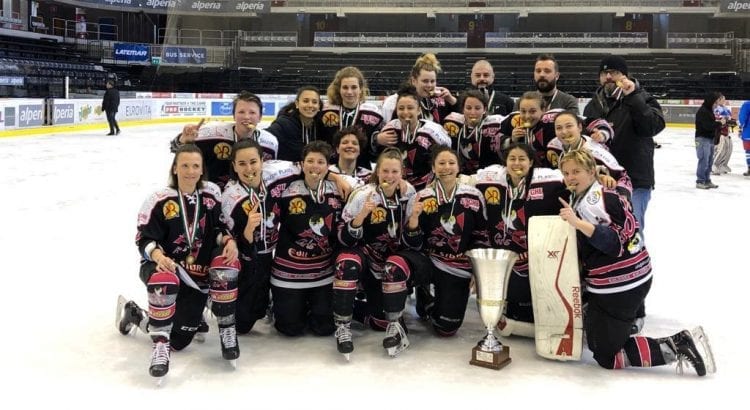 “The past season was awesome,” said defender Linda de Rocco, who has also played on the Italian national team for almost 20 years and previously spent several seasons playing with the EV Bozen Eagles in their EWHL games. “The final consists of a best of three. We lost the first match at home with a result of 4-3 for Bozen. We were so close, but they won.”

The second game went to a shootout, with Alleghe taking the win to ensure a third game. “Thanks to the determination, the power of the group and the great desire for redemption, we won at the penalty shots,” said de Rocco. “We played the perfect game.”

With the series tied at 1-1, the next game determined the league champion, and Alleghe was confident going into the third matchup.

“We were galvanized, while the other team was still shaken by the game of the day before. We managed the game from the beginning and finally we won 3-0.”

The outcome of the series had a bit of a fairytale feeling to it, with big implications for the village of Alleghe. “For us, but also for our supporters and our small mountain village of Alleghe, this is a really big victory,” said de Rocco. “This season was our perfect season.”

Besides being successful on the ice, the Alleghe Hockey Girls have also started to lead the way in terms of grassroots development of girls hockey in Italy. The club hosted Italy’s first ever World Girls’ Ice Hockey Weekend event in October, which brought out 20 girls between the ages of seven and 10.

The goal for women’s hockey in Alleghe is now two-fold, with the club aiming to both contribute to increasing the number of girls playing the sport and continue their on-ice success.

“We do not have so many players and it is very hard to keep together the team for next season, but this will be our first goal and priority… to defend the title.”

Want to learn more about women’s hockey players around the world?

Check out our WHL People features and submit your own story!