With unity and belonging among the key themes of the Maccabiah Games, the impact of the event held tremendous meaning for Samara Lewis. Garbed in the Canadian colors, gracing the ice internationally resulted in the addition of a compelling chapter to a proud friendship. Among the facets of Lewis’s hockey odyssey involves the unique parallel with Melissa Wronzberg, also serving as team captain for Canada. Both members of the same coaching staff in Toronto’s Leaside Wildcats U18 AA team, their collaborative efforts involved dual purpose at the Games.

From excelling on the same line, to providing mentoring for numerous skaters from Team Israel, Lewis and Wronzberg embodied the spirit of the Games. Setting a positive example for the younger players, representing one of the true feel-good stories in Canada’s road towards the gold medal, the chance to reach such vaunted heights alongside a highly cherished friend made the entire experience much more meaningful. 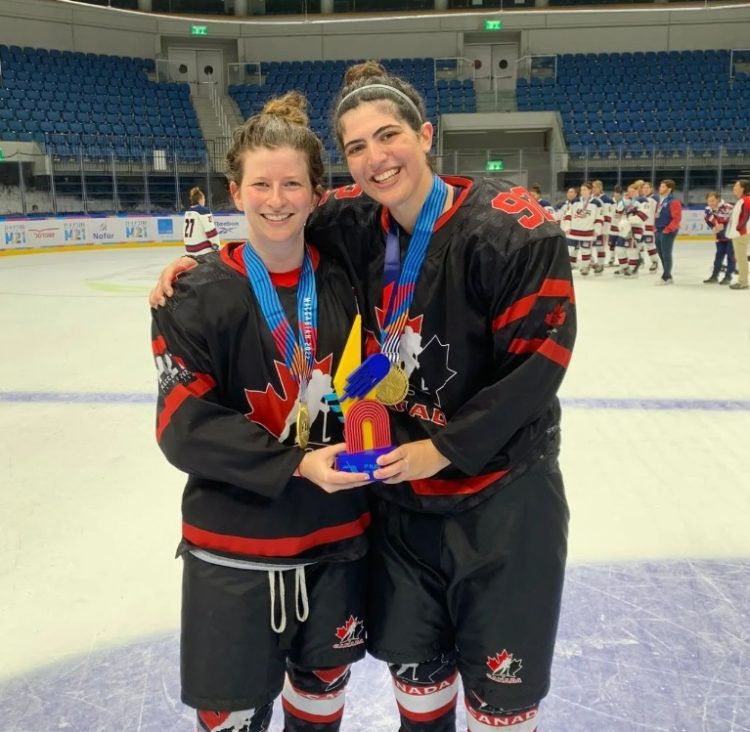 “Melissa and I have coached together for a couple of years now. Also, she is one of my best friends so it was fun to get to play with her and even be on her line. We played shinny together throughout the pandemic but never in a formal setting. It was fun to get to joke around and have fun playing together. It was great that we got to share this experience together but also with both of our families who travelled to watch us play.”

With the number 92 adorning her jersey, Lewis, playing on the wing, scored twice in Canada’s opening game, a convincing double digit win versus Israel. In a rematch with the host nation, resulting in a hat trick, Lewis enjoyed her finest offensive performance.

Perhaps the most poignant aspect of the Games involved the opportunity for Lewis to tap into her coaching skills. Noticing the enthusiasm of the Israeli players, a willingness to learn and hone their craft highly evident, the prospect of sharing her insights proved very fulfilling.

Led by Canadian head coach Peter Smith, Lewis, Wronzberg and teammate Molly Tissenbaum, a two-sport star who once competed in softball at the Games, took to the ice for one of Israel’s practice sessions. Sharing a love of the game, the chance to demonstrate the fundamentals and build confidence fostered a heartwarming link between the skilled Canadians and studious Israeli skaters.

“From the first game against Israel we could see how eager the girls were to learn. When the goalie made a big save or a player had a great block, we were always hyping them up and then they started asking questions to us in the game. How to position to angle out in a faceoff along with how to move someone in front of the net or edge out into the boards.

They wanted to learn and having played and coached for so long, I loved getting to answer questions and show them. When the opportunity for Melissa, Molly and me to attend one of their team practices came, joined by Coach Peter Smith, I could not have been happier and more excited to join. All are so eager to be coached and want to learn so much. It was so great to be on the ice with them in that environment.”

Having started coaching during her high school years, the opportunity to serve in such a capacity provided Lewis with a deeper appreciation for the game. Beginning in the coaching ranks at the Novice A level, finding sincere enjoyment in being at the rink, values such as empathy and trust serve as the foundation of her coaching sojourn.

Continuing such an admirable approach at the Maccabiah Games, it continues a key goal of the game for Lewis; giving back. Elated at the privilege of getting to know the Israeli players as people, Lewis felt an emotional investment in their efforts. While the focus as a player was contributing towards Canadian success on the ice, the progress of Team Israel provided a pleasant pursuit, enriching the parallel pursuit of coaching.

Gaining the opportunity to appreciate women’s ice hockey at the Maccabiah Games from a very different perspective, Lewis enjoyed the next game for Israel from the bench. Gaining a different view, the impromptu experience saw Lewis find inspiration in the tireless efforts of Team Israel to build on their game. 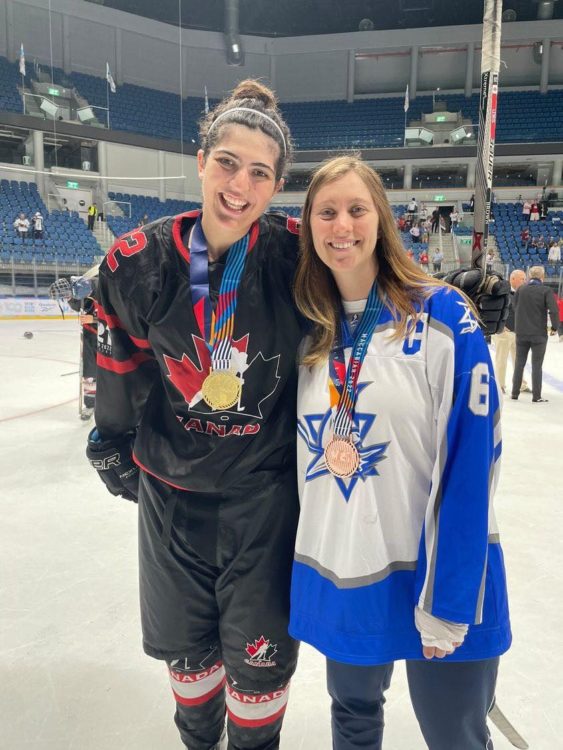 Through the game’s ebbs and flows, putting forth a highly valiant effort versus the eventual silver medalist United States, Lewis witnessed history. Scoring the first goal for Israel in women’s ice hockey at the Maccabiah Games, Ella Hirshfeld gained a prominent place in team lore. Undeniably, the chance to be on the Israeli bench during this compelling moment provided a cherished highlight for an elated Lewis.

“The next day of their practice, my team had the day off but Israel had a game against the United States. I was talking with Esther (Silver) and she offered for me to come watch the game and come on the bench to help give more pointers. Being on the bench with them was so much fun. The score of the game did not matter.

Every shift they went out, worked their hardest, and came off asking questions of what they should in different situations. I was also on the bench when they scored their first goal of the Games. They were so happy and excited. It was priceless.

The second game against them was just as much fun. I now knew all the girls and seeing how much they improved from the first game under a week prior was amazing. When they scored against us, I wanted to celebrate with them. I was so excited. They were more physical and had more confidence.

As Israel is the homeland of her grandfather, a land that he bravely defended and fought for, Lewis’ lineage and honor never wandered far from her thoughts. Enjoying numerous visits to the Holy Land in years prior, this marked her most unique. With a multitude of family members gathered at Pais Arena, this marked the first time that several of them watched her grace the ice. 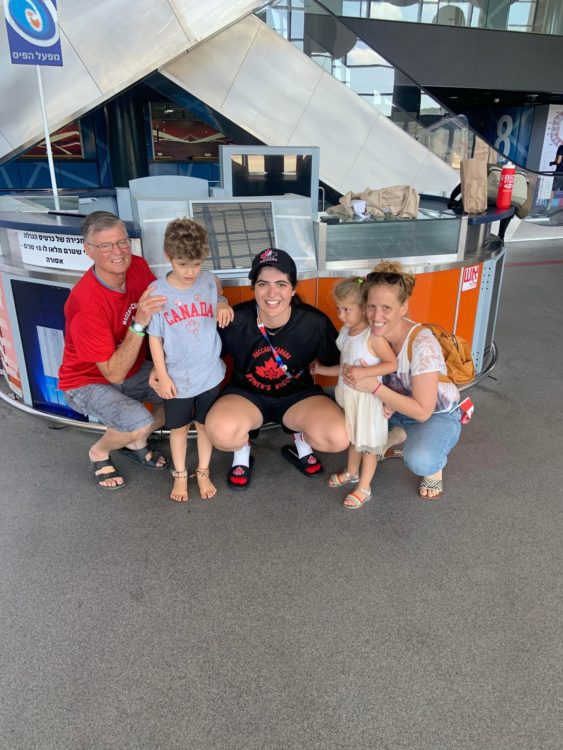 The presence of Lewis’ young cousins, nascent to the rink, saw her coaching instincts rise to the surface, keen to show them the game’s fundamentals. Eager to see them grace the ice one day, they certainly have a tremendous role model to emulate, her golden achievements at the Games destined to stimulate growth.

“Besides hockey. I have been to Israel nine times now with family all over the country. It was great to go and have the opportunity to see them all after the pandemic. Also, for them to all come and see me play, many for the first time. I think I had almost 40 people come to the Finals to see me play.

That is 10 times more than any game I have ever played back home! They were all excited to see hockey and my little cousins were most fascinated by the Zamboni. I think a couple have now also convinced their parents to let them skate. I am working on getting them all to play hockey, so in a couple of Maccabiah Games they can play for Israel!

Looking back on the Games a couple of months out still feels surreal. It was a great experience to get to combine my love of hockey with my love for Israel and add some bonus coaching in there too. Growing the game is important and I am happy to get to be part of that.”

Mark Staffieri
Mark Staffieri
Mark Staffieri
Raised in the Greater Toronto Area, Mark holds an extensive writing background. A contributor to Wikipedia since 2007, his writing endeavors have included writing for Bleacher Report (2012-13), and the former CWHL (2012-15), and the Canadian division of the Legends Football League (2013-14). Also part of the team of writers for Hockey Canada at the 2013 IIHF Women's World Championships in Ottawa, Mark contributed features on Jenny Harss, Elin Holmlov, Iya Gavrilova, Kathleen Kauth, Lucie Povova, Alex Rigsby, Julia and Stephanie Marty, and Katie Weatherston, among others. In addition to composing more than 700 articles for Women's Hockey Life (since 2012), his current slate of duties includes covering female tackle football for Canada Football Chat, along with pieces for NowVIZ Magazine (digital format) since its inaugural issue. Also the publisher of allowhertoplay, a website devoted to the heroics of sporting heroines, Mark remains focused on raising awareness of the positive impact of women in sport.
Previous Post
Esther Silver an esteemed builder for Team Israel (Part Two)
Next Post
AMBASSADOR SPOTLIGHT: Maren Rathbone | Ottawa, ON, Canada