Long celebrated as a multi-sport talent, the skill set of Lauren Weisbarth shone brightest wearing the Maple Leaf at the Maccabiah Games. Having played midget girls hockey during her teens, Weisbarth also served as captain of the ice hockey and basketball teams at York Mills Collegiate. Participating in club hockey at St. Lawrence University (SLU), also a member of the Jewish Student Union, Weisbarth starred on the diamond.

A utility player, splitting time between the infield and outfield, Weisbarth brought consistency to the SLU varsity softball team. Constantly among the team leaders in triples, Weisbarth batted an exceptional .329 in her junior season. 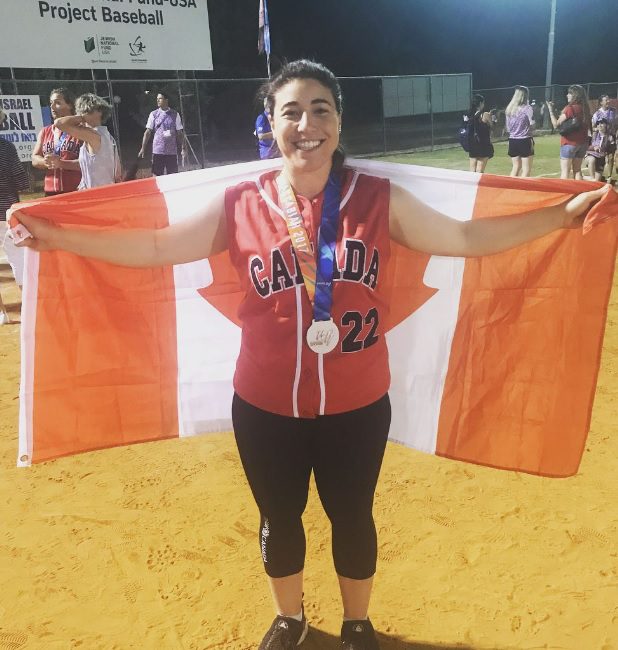 Since graduating from SLU, both sports remained prevalent in her athletic narrative. While Weisbarth kept stick in hand for recreational hockey, the game remaining a source of enjoyment, the 2017 Maccabiah Games foreshadowed another compelling athletic endeavor.

Adding luster to both of Weisbarth’s experiences in Maccabiah Games competition featured the presence of Molly Tissenbaum. Akin to Weisbarth, equally proficient on the diamond and the ice, standing between the pipes, calling each other teammates twice, their shared journey saw them become kindred spirits.

“Softball was an amazing experience, and we won silver which was great. We also handed the USA their first ever loss in women’s softball during the round robin tournament, which was a major accomplishment.

However, ice hockey has always been my favourite sport. Therefore, when the chance to play hockey in the Maccabiah came up, I could not pass on it. The women’s hockey tournament was incredibly fun and very competitive which just added to the experience. As fun as softball was in 2017, hockey was even more so.”

The introduction of women’s ice hockey was a sprawling topic at the Games, filled with many fascinating characters. With a gregarious gathering of talent, the narrative beginning on a strong note, Weisbarth felt the tournament represented a fait accompli.

Having long aspired to grace the ice for Canada, the opportunity to be part of the historic roster participating at the Maccabiah Games allowed Weisbarth a seminal moment. Reflecting on her first appearance in tournament play, gracing the ice versus host country Israel, absorbing the sights and sounds, an atmosphere filled with unbridled enthusiasm, the realization of her dream took on an exciting tone.

“I was beyond ecstatic when women’s hockey was confirmed. I could not be more honoured and grateful to have represented Canada in my favourite sport. An actual dream come true: I used to dream as a young girl of playing for Team Canada in hockey at the Olympics, and this is as close as I will get.

The tournament served as a loving ode to why hockey tugs at the heartstrings. The frozen perimeter providing the rich context, a glorious fruition creating legends while the roster became family, the bond made through hockey consisted of only half the narrative. 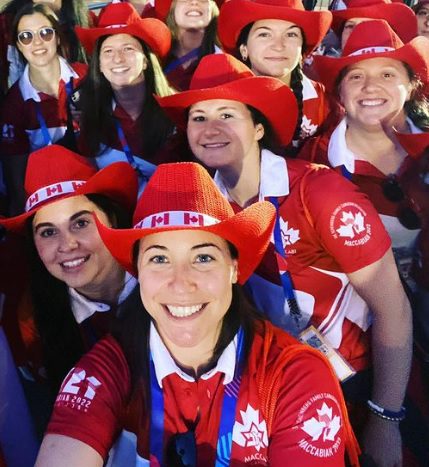 Made equally profound by devotion to one’s faith, the spiritual connection proved highly significant for Weisbarth. Visiting numerous sites throughout Israel, the journey proving highly enlightening, none was as meaningful as Yad Vashem. A Hebrew term meaning “memorial and a name”, it is also Israel’s official memorial to victims of the atrocities from World War II, preserving their memory. Highly emotional for Weisbarth and her teammates, the experience serving as testament to the human spirit.

“The most enjoyable part of the experience was getting to know my teammates. We bonded instantly and I now have a group of friends that will last.

We have a shared experience that none of us will ever forget. The most meaningful experience was meeting the Israeli women’s team and getting to know them. They were so passionate and enthusiastic about the game. They were so keen to learn and get better and were so excited to be competing with us.

Mark Staffieri
Mark Staffieri
Mark Staffieri
Raised in the Greater Toronto Area, Mark holds an extensive writing background. A contributor to Wikipedia since 2007, his writing endeavors have included writing for Bleacher Report (2012-13), and the former CWHL (2012-15), and the Canadian division of the Legends Football League (2013-14). Also part of the team of writers for Hockey Canada at the 2013 IIHF Women's World Championships in Ottawa, Mark contributed features on Jenny Harss, Elin Holmlov, Iya Gavrilova, Kathleen Kauth, Lucie Povova, Alex Rigsby, Julia and Stephanie Marty, and Katie Weatherston, among others. In addition to composing more than 700 articles for Women's Hockey Life (since 2012), his current slate of duties includes covering female tackle football for Canada Football Chat, along with pieces for NowVIZ Magazine (digital format) since its inaugural issue. Also the publisher of allowhertoplay, a website devoted to the heroics of sporting heroines, Mark remains focused on raising awareness of the positive impact of women in sport.
Previous Post
Player turned coach Courtney Tougas spearheads introduction of Celly App
Next Post
AMBASSADOR SPOTLIGHT: Amelie Boutilier | Bouctouche, NB, Canada