With a hockey tradition that dates back decades, the 2021-22 season has provided the Bishop’s University Gaiters with an exciting new chapter. Enjoying their inaugural season of U Sports women’s ice hockey, becoming the sixth member team of the RSEQ Conference, the Gaiters were initially poised to begin play in the autumn of 2020. Although pandemic concerns caused an unfortunate delay; optimism still defined the team culture.

Eagerly awaiting the first puck drop, the sense of arrival and excitement, was only matched by the anticipation of when the first win in U Sports play would take place. Gaiters fans would not need to wait very long as the home opener provided a jubilant brush with history. 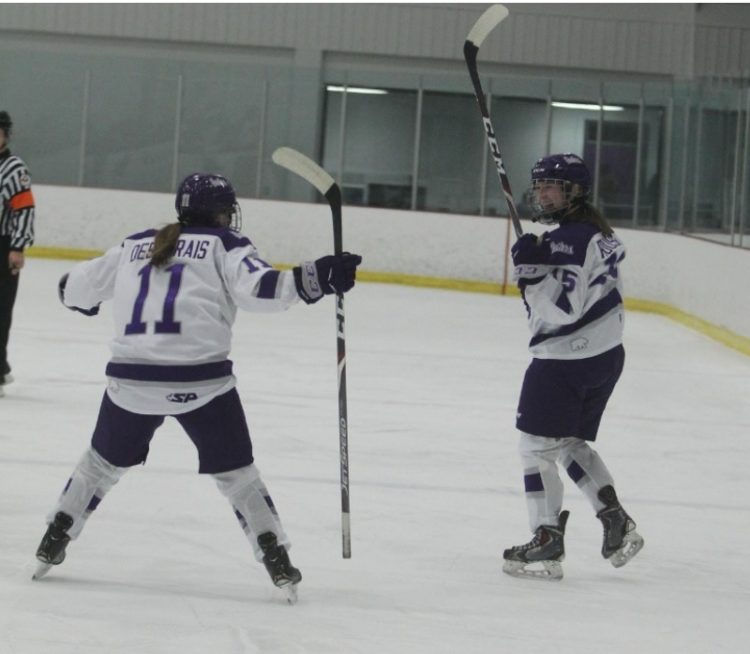 A capacity crowd filled the Jane & Eric Molson Arena in Lennoxville, Quebec on October 31, the Gaiters opposing Les Carabins de Montreal on a Halloween tilt. Proving to be an epic match, the result was a scintillating see-saw battle, the lead changing hands four times.

Although Les Carabins took the game’s first lead, scoring at 8:18 in the first, it only took 43 seconds for the Gaiters to tie the score. Blueliner Gabrielle Rousseau found the back of the net to a roar of approval from the ecstatic gathering of supporters, as Krystele Fontaine and Pascale Desmarais earned the assists.

Before the period expired, the Gaiters would enjoy their first lead of the game. An unassisted goal by Catherine Berger-Dubé held a tremendous facet of the dramatic, as said goal was scored with merely two seconds remaining.

With the score tied at 3-apiece after two periods of play, Rousseau provided the game’s heroics, gaining a cherished place in Gaiters program history. Capitalizing on a power play opportunity, she buried the puck past goaltender Aube Racine at the 9:58 mark, becoming the first Gaiters player to record a multi-goal game in U Sports play.

Gaiters goaltender Charley Wing succeeded in frustrating the offensive attack of Les Carabins, with Rousseau’s second goal standing as the game-winning tally. Fittingly, she was recognized as First Star of the Game,

“Obviously it was an incredible feeling. The energy that the crowd brought to our first home game was beyond expectations. Scoring the winning goal was definitely an exciting part of the game but there is much more to remember from this first U Sports victory.

We showed up and played this game as a team, putting effort on every details and it paid off. I think bringing this first victory back so early in the season, and against a very good team, (it) says a lot about the young team we have. It also proved to us that even though we are a young and new team to the U Sports league we can definitely compete at this level.”

Considering that Rousseau, an alum of Team Quebec Under-18, was raised in Sherbrooke, home of Bishop’s campus, the sense of home ice advantage took on a much more profound meaning. Holding the promise anchoring the defensive unit for several seasons to come, capable of providing offensive flair, the Gaiters have a gem in Rousseau.

In the aftermath of the emotional triumph, Rousseau’s efforts gained her subsequent acclaim. Renowned in the sporting conversation on campus, she captured the Gaiters Provigo Robert-Lafond Female Athlete of the Week Award. Graciously, the feeling of attainment was eclipsed by praise for her teammates, acknowledging that the defeat of Les Carabins was attributed to a solid team effort, qualities that speak of strong leadership,

“For me, it makes sense that Bishop had decided to put one of ours for the Gaiters Women Athlete of the week. We marked the history of Bishop’s Women Hockey with this first win and it was a way for them to show their pride in us.

(Surely), I was extremely grateful for being named Gaiters Women Athlete of the week, but I perceived this much more as a team reward than an individual one.

There are still 25 others girls that contributed to this victory and could have been selected for this recognition. I am really proud of what we have accomplished and excited to see what is coming up for us.”

Around the RinkU SPORTS

Mark Staffieri
Mark Staffieri
Mark Staffieri
Raised in the Greater Toronto Area, Mark holds an extensive writing background. A contributor to Wikipedia since 2007, his writing endeavors have included writing for Bleacher Report (2012-13), and the former CWHL (2012-15), and the Canadian division of the Legends Football League (2013-14). Also part of the team of writers for Hockey Canada at the 2013 IIHF Women's World Championships in Ottawa, Mark contributed features on Jenny Harss, Elin Holmlov, Iya Gavrilova, Kathleen Kauth, Lucie Povova, Alex Rigsby, Julia and Stephanie Marty, and Katie Weatherston, among others. In addition to composing more than 700 articles for Women's Hockey Life (since 2012), his current slate of duties includes covering female tackle football for Canada Football Chat, along with pieces for NowVIZ Magazine (digital format) since its inaugural issue. Also the publisher of allowhertoplay, a website devoted to the heroics of sporting heroines, Mark remains focused on raising awareness of the positive impact of women in sport.
Previous Post
Updated Details on PWHPA’s Dream Gap Tour Toronto
Next Post
AMBASSADOR SPOTLIGHT: Seonaid Parker | Perth, Australia