Mark Staffieri
Mark Staffieri
1 year ago
Among her most impressive achievements, Lieffers was merely 23 when she became only the third woman to attain Hockey Canada’s Level 5 Officials Certification.

Holding a place on the SMHA’s Referees’ Division Committee, Lieffers was among a group of officials that made headlines in February 2019. Belonging to an all-female officiating crew that worked a Saskatchewan Midget AAA Hockey League game for the first time.

Originally named to the group of officials that were scheduled to work the 2021 IIHF Women’s Worlds, scheduled from May 6 to 16 in Halifax, jubilation was quickly met by desolation for Lieffers as the event was shelved. Considering this marked the second straight year that Lieffers was unable to participate at an IIHF event due to concerns over the COVID-19 pandemic, the revelation that Calgary would serve as host city, with a bubble format, provided elation.

“For me, this was a big step in my officiating career,” Lieffers mentioned. “In March of 2020, I was selected to go to France for the Division I Women’s Worlds. Unfortunately, this event was cancelled due to Covid. When I received my selection for the Women’s Worlds in April in Halifax, I was incredibly excited and honoured to be selected. This was my first opportunity to skate at a World Championship.” 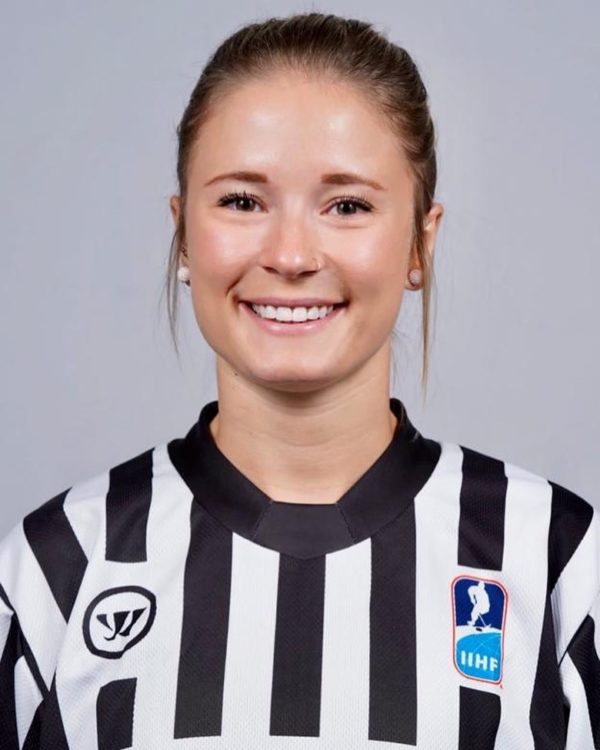 Already possessing some solid international credentials, selected by the IIHF to be part of the officiating crew for the 2020 World Youth Olympics in Lausanne, Switzerland; the year prior saw Lieffers travel to Dumfries, Scotland, part of the crew officiating Group B play at the 2019 IIHF U18 Women’s World Championship, Division 1 championships.

With Calgary allowing Lieffers the opportunity to work her first-ever IIHF World Championships, there was a facet of coming full circle. One of Lieffers’ first international experiences involved the 2018 Four Nations Cup, held in her home province. Privileged at the opportunity to add a special chapter to her career with another experience in Prairie, Canada, the bubble format presented adjustments that were, understandably, not part of a typical itinerary for an official.

Leiffers was required to arrive 10 days before the tournament started and entered a six and a half day quarantine.

” […] This was a really unique tournament as we had so much extra time to prepare and get to know the other officials and our officiating coaches, virtually of course, before the event started.”

“[…] The tournament itself was 11 days. The bubble life consisted of the hotel, the shuttle, and the rink, It was an incredible and unique experience; one that was SO worth it to be aback on the ice again and to have the opportunity to skate with the top teams and officials from around the world.”

Lieffers’ first assignment was a historic one as the August 21 match saw Hungary national team make their debut in the top division of the IIHF Women’s Worlds. Losing 3-0 to Germany, Lieffers shared referee duties with Swedish official Maria Furberg.

Wrapping up the worlds by working the semi-final between the United States and Finland, her reflections encompass a joyous achievement. Gracious at the opportunity to bring her skills to one of the biggest stages in the game, the opportunity proved to be well worth the wait.

“It was a great feeling to be back on the ice doing what we love. Even thought the rink was empty without fans, it did not feel like we were in the bubble while on the ice. All that mattered was that we were back on the ice and the tournament was on. We were very lucky to have such an awesome host team in Calgary, who worked hard to make this event happen. I am so fortunate to have been selected for this event!”

Mark Staffieri
Mark Staffieri
Mark Staffieri
Raised in the Greater Toronto Area, Mark holds an extensive writing background. A contributor to Wikipedia since 2007, his writing endeavors have included writing for Bleacher Report (2012-13), and the former CWHL (2012-15), and the Canadian division of the Legends Football League (2013-14). Also part of the team of writers for Hockey Canada at the 2013 IIHF Women's World Championships in Ottawa, Mark contributed features on Jenny Harss, Elin Holmlov, Iya Gavrilova, Kathleen Kauth, Lucie Povova, Alex Rigsby, Julia and Stephanie Marty, and Katie Weatherston, among others. In addition to composing more than 700 articles for Women's Hockey Life (since 2012), his current slate of duties includes covering female tackle football for Canada Football Chat, along with pieces for NowVIZ Magazine (digital format) since its inaugural issue. Also the publisher of allowhertoplay, a website devoted to the heroics of sporting heroines, Mark remains focused on raising awareness of the positive impact of women in sport.
Previous Post
UNB Reds host inaugural camp for Indigenous Girls
Next Post
PWHPA Unveils Plans for Secret Sponsored All-Star Team