The coolest thing happened this spring: I got invited to play in an all-girls tournament in Boston for the Boston Shamrock Elite Tournament. I’ll admit, at first I was scared.  I would be playing with girls I had never met and being coached by a coach I had never met.  I got to play with a team from New York—the Long Island Gladiators.

We live a long way from Boston, but we drove there anyway.  It was about 18 hours or so.  Mom and Dad drove through the evening on Wednesday night and stopped in Virginia.  Thursday morning we woke up and continued onto Boston.  We got to Boston Thursday around 9 PM, so I got a good night’s sleep before the first game on Friday.

When we woke up Friday, I got to meet a few of my weekend teammates and the coach.  We sat down and told each other about ourselves.  Coach gave us fist bumps and we talked about some of the stuff we would be doing when we played our games.  My favorite new play he taught us was jailbreak. That’s when at the faceoff everybody but the center lifts up the other team’s sticks with our sticks, and then the center tries to put the puck in between the other team’s center and then everybody has to skate their butt’s off to try to score.  He also told us the defensive pinch.  That’s when the defense on our team plays a forward position for a second.

I got to the rink for the first game, and yes, I was still pretty nervous.  I was afraid I wouldn’t fit in and be able to play as good as these girls on my team.  These girls were tough, and while I play against boys all the time, I think these girls were tougher.  I mean, during one of our games, one of the girls got hit pretty hard, but she got right up and skated to the bench.  She was hurt, but didn’t cry.  Some of the boys on my home team get hit by a puck, and the whole game stops because they won’t get up.  Anyway, the first game I started slow because of my fear.  I was also trying to see how they would play and get used to their style.  They actually passed the puck around!  There were no puck hogs!  By the second period I was feeling better.  I got a great pass from one of the girls as I was skating up the center and scored!  Now I felt better and confident!  We won the game!  We went back to the hotel and got something to eat, everyone was pretty tired from traveling so we didn’t do much that day.

On Saturday, we had two games and we won them both!  The team was really starting to come together and play great.  I felt silly for being scared, I wish we could play a whole season together now.  The coach was super nice, and he took the game really seriously.  On Sunday we would start playing for the championship, with two games maybe. 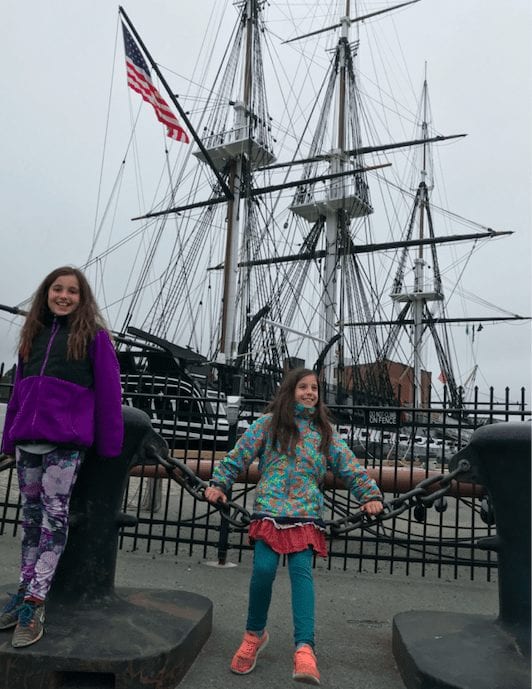 After our last game on Saturday, we went to see some sites in Boston.  My Aunt Lisa surprised me by coming in to watch the games—she had never been to Boston before either.  We drove to the city and started walking around.  We walked along the Freedom Trail.  This trail brings you to many history sites in Boston.  First we saw the Paul Revere House, then we ate cannoli at Mike’s Pastries, (you should go there when you are in Boston).  I wish I had one right now.  As we were walking  around we saw a lot of Boston Bruins jerseys.  Even though I think Boston is a dirty team, it was still pretty cool to see everyone celebrating the playoffs in a hockey city.  We went to Boston College and I got a Boston College Hockey shirt.  The school looked pretty cool and reminded me of Hogwarts, it was really pretty.  We also saw the graveyard where Paul Revere was buried.  Boston has a lot to see.  It is one of the biggest places to see history.

On to the game on Sunday.  We played a team that was really good, but we kept up with them the whole game.  But they got one goal and we lost 1-0.  It was sad, our weekend was over because we lost.  Coach Bret said he was still proud of us because of how good we played.  One of the moms came in and got everyone’s phone number so we could text and keep in touch with each other.  We said goodbyes and all promised to train harder so we could come back and beat them next year.

Since the day ended early, we decided to go back to Boston.  This time we saw a lot more.  We went to the Boston Massacre site.  My mom called me the tour guide because I had actually learned a lot about the Revolution in school this year thanks to my teacher, Mrs. Blocksidge.  We went to see the Green Dragon Tavern, where the Patriots met and planned many of their plans for the revolution.  We saw where the Boston Tea Party took place, and you can throw fake tea barrels overboard the ships.  We saw the USS Constitution.  We went to Bunker Hill.  I told my parents I want to move to Boston, it was amazing, or as they say – wicked!  For dinner, my mom told us we had to try Boston Baked Beans because we are in Boston.  They were really good.

It got late, so we had to head back to Georgia and back to school.  I had a great time in Boston and can’t wait to go back.  The tournament was awesome!

On to tryouts for my team in Georgia, which I will tell you about next time!

Want to write about your hockey adventures?