Behind The Front paints a captivating image

Bringing talent on the ice and on the canvas, Kimberly Sass has combined both interests, masterfully creating a stirring social statement on sporting equality. A goaltender, having stood between the pipes in the professional ranks with the Buffalo Beauts and Metropolitan Riveters franchises, Sass enjoyed the jubilation of hoisting the Isobel Cup in 2018.

Currently employed as an architectural designer, the highly cerebral Sass remains passionate about raising awareness for the female game. Launching SASS STUDIO, the platform served as encouragement to tap into her passion for art. Utilizing a creative motivation, the visual effort has resulted in Behind the Front (BTF). With the first completed work dating back to 2019, the canvas provides motivation, sending a powerful message about the realities of life for professional female hockey players.

From an artistic perspective, Sass’ works incorporate pops of coloUr and stylized elements, part of the vision that helps BTF shed an important light in the struggle for improved conditions. Piercing through the perceptions, making a bold statement about the need for a living wage, ice time and equity, Sass expresses the views of other players who endured similar struggles. 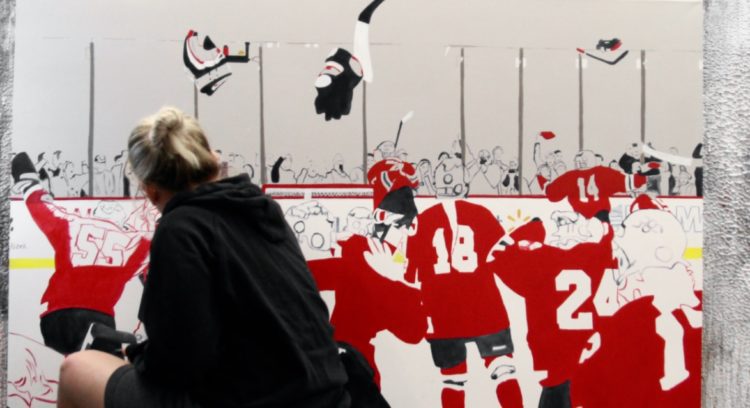 “I began the first painting in Behind The Front in 2019 and the idea for the piece/show came from the frustrations that my teammates and I faced playing pro women’s hockey.

We found ourselves laughing off negative experiences in the locker room and it made me question if there was anything more productive that I personally could do to raise awareness of the inequities present in pro female sports.  I decided that using my skills in art to draw attention to the disparities between pro men’s and women’s hockey could be my unique contribution to the sport (in addition to my playing career).

The goals of the show are to raise awareness of the issues prevalent in pro women’s hockey, to gather individual and corporate support for pro women’s hockey/sports. To raise funds for the future of pro women’s sports (ten percent of artwork sales (auction and prints) through April 1, 2022 will benefit the Women’s Sports Foundation), and to inspire people to speak up and spark change.”

Making its debut in one of America’s most prestigious sporting venues, Sass hopes that it leads to an empowering beginning for the exhibit of her advocacy art show. Opening at Madison Square Garden’s Hulu Theater on January 30, Sass expresses her views through a collection consisting of large-scale paintings and installation pieces.

Part of the New York Rangers Girls Hockey Day, presented by Dunkin’, a panel discussion, plus a VIP Meet and Greet also comprise the experience of BTF. Certainly, the showcase at MSG provides a prestige of relevance, one that Sass hopes shall stimulate honest, yet sincere dialogue, geared towards raising awareness of the realities of the professional game.

“I have wanted to get back into art since I graduated and went into architecture.  There is so much freedom in art that I have missed being in architecture.

As my first formal art show with SASS STUDIO, being able to showcase my work and portray these important sports/societal messages at one of the most iconic venues in the USA is huge.

The NY Rangers lending their platform and contributing to the conversation provides hope for the future of our sport.”

Following the exhibit at MSG’s Hulu Theater, BTF finds another home. On display at Jersey City’s Novado Gallery in the early weeks of February, highlighted by receptions on the 2nd, 4th and 5th, the exhibit proceeds to Buffalo. 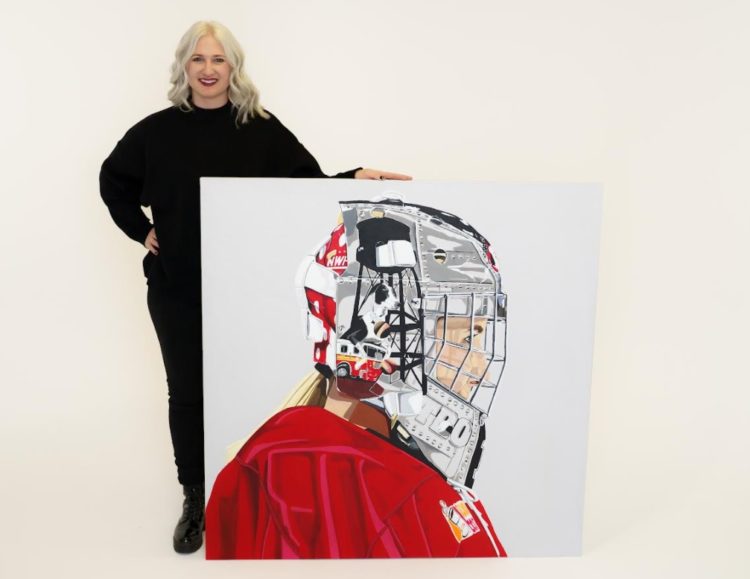 With the prospect of later exhibits on the West Coast, aspiring for venues in Seattle, whose expansion Kraken shall play the Rangers on Girls Hockey Day, and Los Angeles, only the aspiration of raising awareness could exceed the tremendous momentum. With Sass bringing a fresh perspective towards bringing about positive change for the game, the images connecting player to ice, and sacrifice to reality, the greatest achievement may come from a theme of unifying others towards propelling such change.

Mark Staffieri
Mark Staffieri
Mark Staffieri
Raised in the Greater Toronto Area, Mark holds an extensive writing background. A contributor to Wikipedia since 2007, his writing endeavors have included writing for Bleacher Report (2012-13), and the former CWHL (2012-15), and the Canadian division of the Legends Football League (2013-14). Also part of the team of writers for Hockey Canada at the 2013 IIHF Women's World Championships in Ottawa, Mark contributed features on Jenny Harss, Elin Holmlov, Iya Gavrilova, Kathleen Kauth, Lucie Povova, Alex Rigsby, Julia and Stephanie Marty, and Katie Weatherston, among others. In addition to composing more than 700 articles for Women's Hockey Life (since 2012), his current slate of duties includes covering female tackle football for Canada Football Chat, along with pieces for NowVIZ Magazine (digital format) since its inaugural issue. Also the publisher of allowhertoplay, a website devoted to the heroics of sporting heroines, Mark remains focused on raising awareness of the positive impact of women in sport.
Previous Post
AMBASSADOR SPOTLIGHT: Libby Hinrichs | Andover, MN, USA
Next Post
AMBASSADOR SPOTLIGHT: Alexe Villebrun | Sault Ste. Marie, ON