Following the Mississauga Chiefs appearance in the 2010 Clarkson Cup tournament, the theme of change continued in the CWHL tenure of co-founder Sami Jo Small. In what proved to be the final game under the name Mississauga Chiefs, the following year saw the team, based on a board decision, move back to Toronto to ensure a team in the CWHL carry the Toronto name.

Continuing on with a new name, whom Small called her club team since 2002, dating back to the first NWHL, amassing 52 regular season wins and 15 shutouts, her final season in Chiefs colors (2009-10) may have been her finest. Recording 23 appearances, her highest since standing between the pipes in 24 contests for the Toronto Aeros during the 2003-04 NWHL season, Small’s efforts led by example as the Chiefs finished second overall in the league standings. 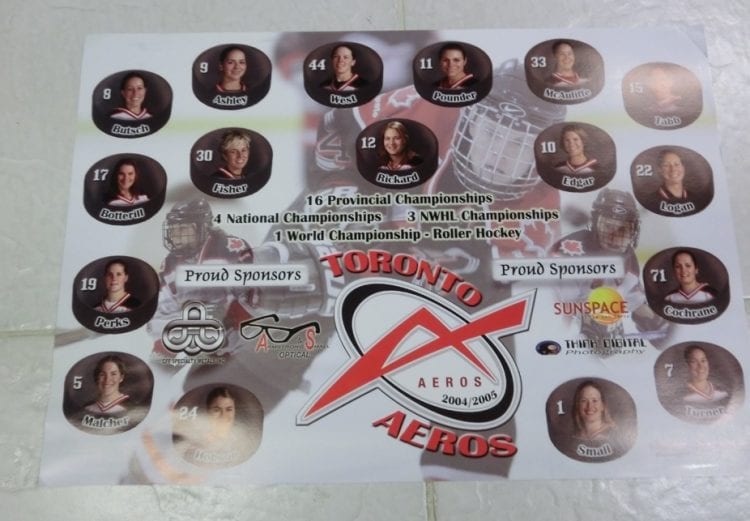 By season’s end, Small, along with blueliner Shannon Moulson, younger brother of NHLer Matt Moulson, only in her second pro season, earned spots on the league’s Second Team All-Stars. Additionally, the Chiefs were represented on the First-Team All-Stars by Sommer West, recording 35 points, including the 100th of her career on November 7, 2009. Although it marked the second straight season that Small gained postseason Second-Team All-Star status, the off-season saw further change as Moulson and West aligned with the Burlington Barracudas, via a draft.

Heading into the 2010-11 CWHL season, Small would also find herself in a new jersey. Joined by Jennifer Botterill, the two would form the core for a now Toronto-based team, a roster which was an amalgam of Chiefs and Flames alumnae. Adopting the blue and white colour scheme of the NHL’s Toronto Maple Leafs, their arrival on the CWHL landscape also included the expansion Boston Blades. Akin to Toronto, the Blades colour scheme resembled that of their NHL brethren, utilizing the famous black and gold of the Bruins. 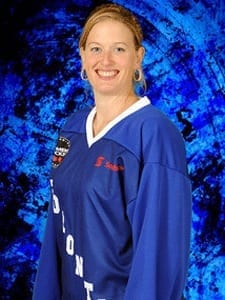 Associated with the Toronto franchise (officially named Furies in 2011) until their final season in 2019, spending seven as a player and one as their General Manager, it marked a change for the better, providing Small with a permanence that would identify her with the franchise for the remainder of her career.

Even the use of the nickname “Furies” propelled Small into popular culture. Featured on History Channel’s “What’s In A Name?” television program, the episode, which aired on September 12, 2011, Small and her teammates decided from five suggested nicknames, including Force, Snipes, Tornadoes and Vamps.

Certainly, a watershed moment in both, CWHL and franchise, history, their first season culminated with another milestone, qualifying for the Clarkson Cup Finals. Recording a regular season won-loss mark of 8-11, four losses coming via shootout, Small won in her debut for Toronto, amassing a solid 43 saves in a 2-1 victory against the Burlington Barracudas. Coincidentally, the Barracudas would supply Small with another milestone, as her first shutout win for the franchise took place against them, requiring 37 saves in a convincing 9-0 win.

Winning a pair of games in the postseason, there was also a significant feeling of redemption for Small. On March 25, 2011, she logged a 6-0 shutout win over Minnesota, avenging her postseason loss from one year earlier against them while garbed in the paraphernalia of the Mississauga Chiefs.

Additionally, there was a strong sense of coming full circle professionally. Including Botterill, whom Small called a teammate with the Canadian National Team, and professionally with the franchise known as the Toronto Aeros and later the Mississauga Chiefs, this dazzling duo would launch an exciting new chapter. Kendra Fisher, who was Small’s goaltending partner for two seasons with the Aeros, also joined the Furies for their inaugural season. As a side note, Small would gain the start for Toronto in the Clarkson Cup Finals, challenging the Montreal Stars at Barrie, Ontario’s Molson Centre. Despite the franchise unable to win the hallowed Cup, as Montreal began carving out their dynasty, the dream of an elusive title at the CWHL level would be realized. 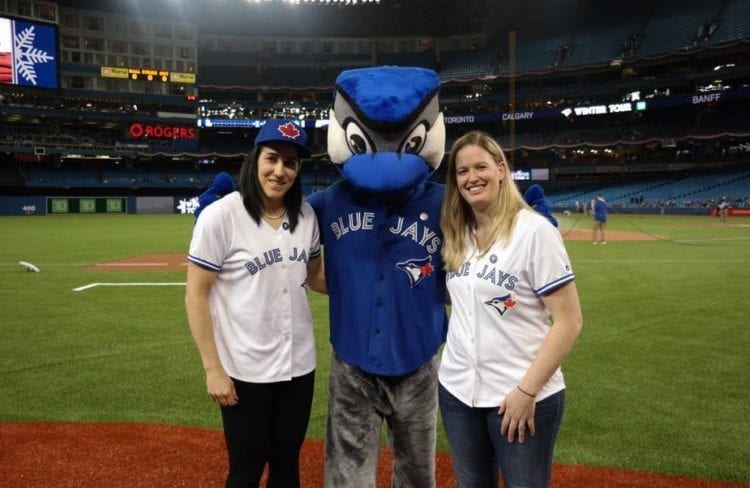 With Christina Kessler joining the Furies in 2012, it marked a turning point. Comprising one of the league’s all-time greatest goaltending duos, their collaborative efforts were crucial in a triumphant 2013-14 campaign. As Kessler gained a spot on the CWHL First-Team All-Stars, while Alyssa Baldin and multi-sport sensation Carolyne Prevost earned Second-Team nods, Small proved to be the league’s finest back-up goaltender.

Excelling in the role, demonstrating a commendable maturity and team first approach, Small recorded a 7-2 record, emerging as a valuable contributor constantly capable of giving her team a chance to win. Considering that the club also saw Sommer West as head coach, while Shannon Moulson was a highly dependable blueliner, it rekindled fond memories of great times in Chiefs colors. With Britni Smith scoring in overtime to defeat the favored Boston Blades in the 2014 Clarkson Cup Finals, it marked further ascension of Small to legendary status. Along with teammates Tessa Bonhomme and Natalie Spooner, who would be the first (and only) player to capture Winter Games gold and the Clarkson Cup in the same year, Small would join the Triple Gold Club for women. 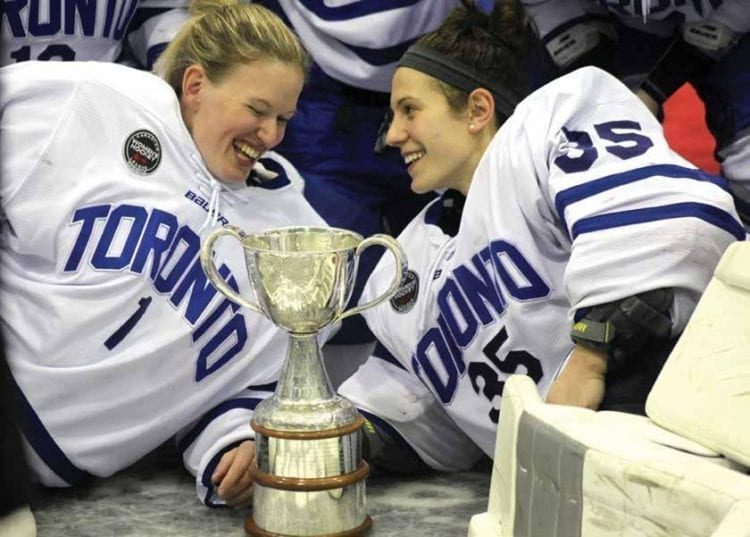 Recognizing a competitor that has won an IIHF World Championship, Winter Games gold, and the Clarkson Cup, the history of said Club is one that features a renowned group of goaltenders. Including Kim St. Pierre and Charline Labonte, whom Small has called teammates on numerous editions of Team Canada, along with Genevieve Lacasse and Alex Rigsby, they have established a standard of excellence that shall see them intertwined in the early 21st Century lore of professional women’s ice hockey.

The prestige is one which Small looks at with a broader appreciation of the game. Believing that the parameters should be altered, in order to recognize the predecessors who emerged victorious at the Esso Women’s Nationals, in which the championship team received the Abby Hoffman Cup, along with the championship from the original NWHL, known simply as the NWHL Cup.

“While I am proud to have been deemed to be in the ‘Triple Gold Club’, I think limiting this to just the CWHL does a disservice to all the amazing players that came before me. I think winning an Esso Women’s Championships and NWHL Cup should also be deemed to be ‘top club championship’.

Players such as Geraldine Heaney, Cassie Campbell amongst many others, deserve to be on this list. On that token, I think winning my first Esso Nationals in 2004 would have put me in this esteemed club. There should be acknowledgement for all the women that played in the old NWHL, the COWHL before that and any top league prior to that, not only in Canada, but around the world.”

Merely months following the glory of the Clarkson Cup, Small achieved another important milestone in her CWHL odyssey. Along with fellow Furies goaltender Christina Kessler, the two were among nine luminaries from the franchise participating in the 2014 CWHL All-Star Game. Hosted at Toronto’s Air Canada Centre, it is deemed to be the inaugural edition. As Small recollects, the 2014 affair was technically not the league’s first All-Star event. Back in 2008, the league assembled a group of All-Star players, including Small, which challenged a team composed of NHL Alumni. 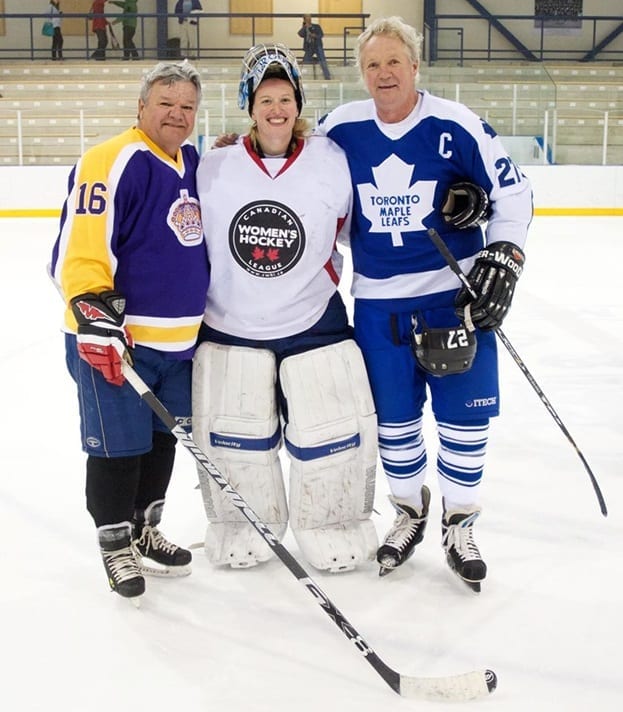 “This was not the first time the CWHL had an All-Star Game. The first was held in our first season in 2008 and we put together an All-Star team to play against an NHL Alumni team. We played at Copps Coliseum in Hamilton and it was a whole weekend event. That was a really fun game to be a part of and for the first time was able to mingle with my opponents and get to know them on a personal level.”

Historically, 2014 marked the first time that a CWHL All-Star event featured its players comprising both rosters. Taking into account that the rosters for Team Red and Team White were assembled via a Frozen Fantasy Draft, it served as an opportunity to pay homage to Small and Lisa-Marie Breton-Lebreux, the first player to serve as captain of three Clarkson Cup winning teams. As Small and Breton-Lebreux were the last of the league’s founders still playing, a heartwarming gesture saw this distinguished duo taken as the top two picks overall of the Fantasy Draft.

“I think it was Spooner and Labonte that selected myself and Liz first overall. That was a real honour acknowledging the hard work and effort we had put in behind the scenes to build the league. I think my most special moment with Liz was after the Montreal team won their first Clarkson Cup in 2009. The event was held in Kingston and my Mississauga team did not make it.

The top two in the CWHL (Montreal and Brampton) competed against the top from the WWHL (Minnesota and Brampton). Because I was not playing, I was assisting Brenda Andress and her head office team with the behind the scenes. After their Championship celebration, Liz brought me in the Montreal dressing room and presented me with a card signed by all the players in front of the team.

It was a truly touching moment between two rivals turned colleagues, turned friends. Women’s hockey will be forever indebted to Lisa-Marie Breton-Lebreux, not only for all she did, but for all the negative comments she took as she pressed for a better future. She believed in the power of the collective whole and always acted with integrity and honour serving the game.” 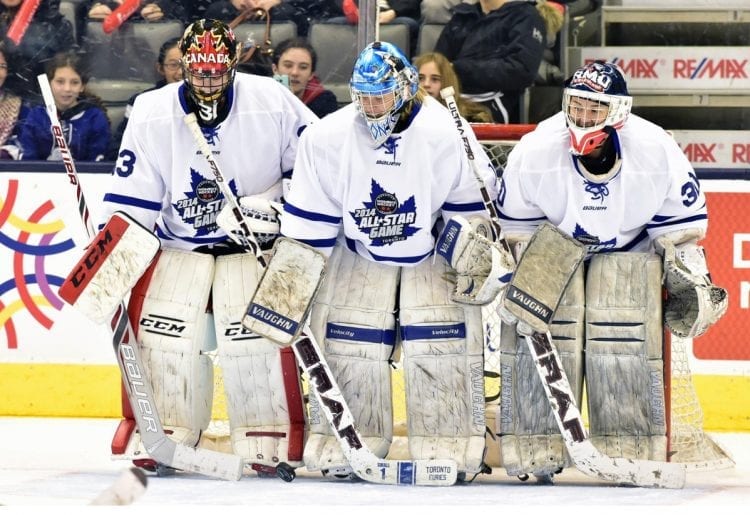 While Small was drafted to Team White, Kessler would suit up for Team Red, marking a unique experience, as the two Cup champions became opponents. Additionally, Charline Labonte, who was voted captain for Team Red, and Erica Howe would call Kessler a teammate. Meanwhile, Genevieve Lacasse, who calls the Boston Blades her club team, and fellow Manitoban Delayne Brian, completed the goaltending picture for Team White. Worth noting, the Second CWHL All-Star Game, contested in 2016, saw Brian and Kessler become teammates, leading Team Black to a 5-1 thumping of Team White.

“Getting to play in the All Star Game in 2014 was also special because it was something I helped create. I felt more like a proud parent seeing all the hard work displayed before my eyes. I wanted to have a good showing, but more importantly, I was honoured to be in a dressing room with so many talented hockey players.

It was a real pleasure to get to play alongside Delayne Brian, who like me is also from Winnipeg, and whom I have known since she was in junior high school. To see her talents rewarded and for her to go on to win the Clarkson Cup MVP was truly special. Also, to be teamed up with fellow Toronto goaltender Christina Kessler was special. I had always been in awe of her athleticism but more importantly, she was a really great friend.”

Mark Staffieri
Mark Staffieri
Mark Staffieri
Raised in the Greater Toronto Area, Mark holds an extensive writing background. A contributor to Wikipedia since 2007, his writing endeavors have included writing for Bleacher Report (2012-13), and the former CWHL (2012-15), and the Canadian division of the Legends Football League (2013-14). Also part of the team of writers for Hockey Canada at the 2013 IIHF Women's World Championships in Ottawa, Mark contributed features on Jenny Harss, Elin Holmlov, Iya Gavrilova, Kathleen Kauth, Lucie Povova, Alex Rigsby, Julia and Stephanie Marty, and Katie Weatherston, among others. In addition to composing more than 700 articles for Women's Hockey Life (since 2012), his current slate of duties includes covering female tackle football for Canada Football Chat, along with pieces for NowVIZ Magazine (digital format) since its inaugural issue. Also the publisher of allowhertoplay, a website devoted to the heroics of sporting heroines, Mark remains focused on raising awareness of the positive impact of women in sport.
Previous Post
At-home hockey workout for speed, coordination, and strength
Next Post
AMBASSADOR SPOTLIGHT: Brooke Davis | Okotoks, Alberta