Part of a celebrated group of alumnae from Northeastern University making their mark in professional hockey, the 2021-22 season has included numerous milestones for Alyssa Wohlfeiler. Skating for the Connecticut Whale, the California-raised forward is also one of the club’s assistant captains, having quickly made a notable impression.

In the Whale’s season opener, the first under the league’s rebranding, adopting the moniker PHF, Wohlfeiler, scored the first goal of this exciting new era. Achieving the feat on November 6, 2021, scoring on Metropolitan Riveters’ goaltender Brooke Wolejko in a 4-1 loss, assists credited to Emily Fluke and Hannah Bates.

The following day, Wohlfeiler recorded a superlative three-point effort, propelling the Whale to its first win of the season.  Logging eight points in the first half of the season, with the club enjoying a 5-1-0 mark from her efforts, an even greater reward followed. 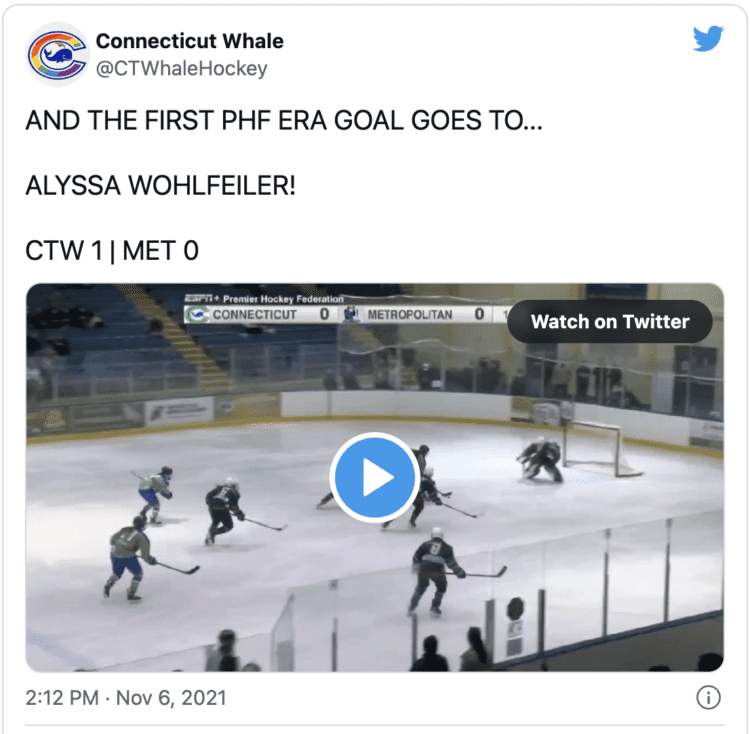 One of eight members from the Whale named to the 2022 PHF All-Star Game, it marked a sensational first for Wohlfeiler, whose professional sojourn has taken her to both sides of the Atlantic. With a competitive resume that has seen her play for teams in Austria (Lugano), Germany (EC Bergkamener) and Sweden (HV71), the 2021-22 marks her fourth professional campaign in the NWHL/PHF.

“It is obviously a huge honor to be named to the All Star team, especially for the first time and at this stage in my career. I am just very appreciative to the people who have supported me throughout my career.”

A charter member of the Whale, making 17 appearances in the 2015-16 season, Wohlfeiler returned to the league in 2019-20, donning the paraphernalia of the Boston Pride, one of two Beantown-based franchises that she has played for throughout the seasons. Back in Whale colors since the bubble season in Lake Placid, a unique facet of her All-Star experience involved the chance to skate on the same team as captain Shannon Doyle-Turner, another of the Whale’s charter members.

Joined by Allie Munroe, all three graced the ice at Buffalo’s Northtown Center as members of Team Darkangelo, named after captain Shiann Darkangelo. Coincidentally, Darkangelo, who played her final two seasons of NCAA hockey in the Nutmeg State, skating for Hamden’s Quinnipiac Bobcats, also played in the Whale’s inaugural season. Currently starring for the Toronto Six, Darkangelo was not the only familiar face during All-Star weekend. 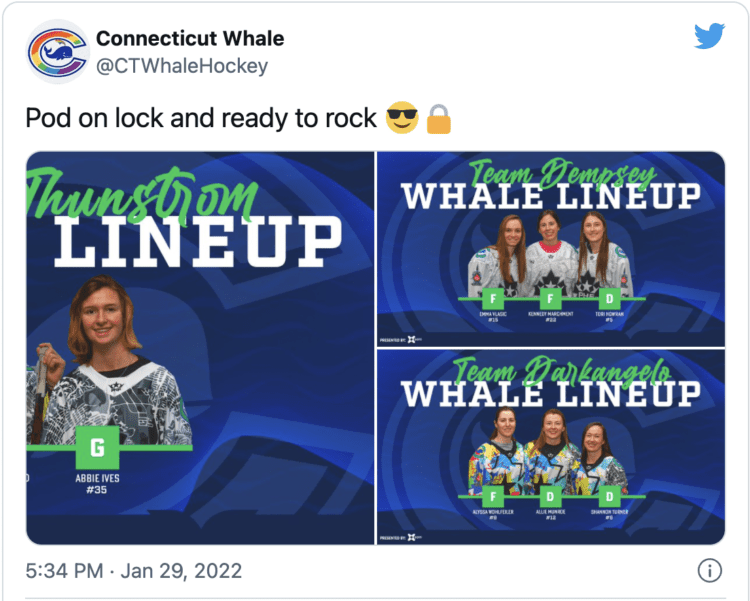 Reflecting on this unique complexion of lineups, it did not mark any significant deviation for Wohlfeiler. Acknowledging the routine of practice, a common practice to line up opposite teammates, the All-Star stage provided a different element, one that provided the highly skilled forward with a seminal moment in her career.

“It actually was not that weird playing against teammates since we do it in practice every week, but you definitely have a little extra motivation going against them. It was cool to interact with other players in the league but it is always nice to have some familiar faces on your own team.”

Mark Staffieri
Mark Staffieri
Mark Staffieri
Raised in the Greater Toronto Area, Mark holds an extensive writing background. A contributor to Wikipedia since 2007, his writing endeavors have included writing for Bleacher Report (2012-13), and the former CWHL (2012-15), and the Canadian division of the Legends Football League (2013-14). Also part of the team of writers for Hockey Canada at the 2013 IIHF Women's World Championships in Ottawa, Mark contributed features on Jenny Harss, Elin Holmlov, Iya Gavrilova, Kathleen Kauth, Lucie Povova, Alex Rigsby, Julia and Stephanie Marty, and Katie Weatherston, among others. In addition to composing more than 700 articles for Women's Hockey Life (since 2012), his current slate of duties includes covering female tackle football for Canada Football Chat, along with pieces for NowVIZ Magazine (digital format) since its inaugural issue. Also the publisher of allowhertoplay, a website devoted to the heroics of sporting heroines, Mark remains focused on raising awareness of the positive impact of women in sport.
Previous Post
China and Japan face-off for first time in a generation
Next Post
Six skaters score for Canada in convincing win