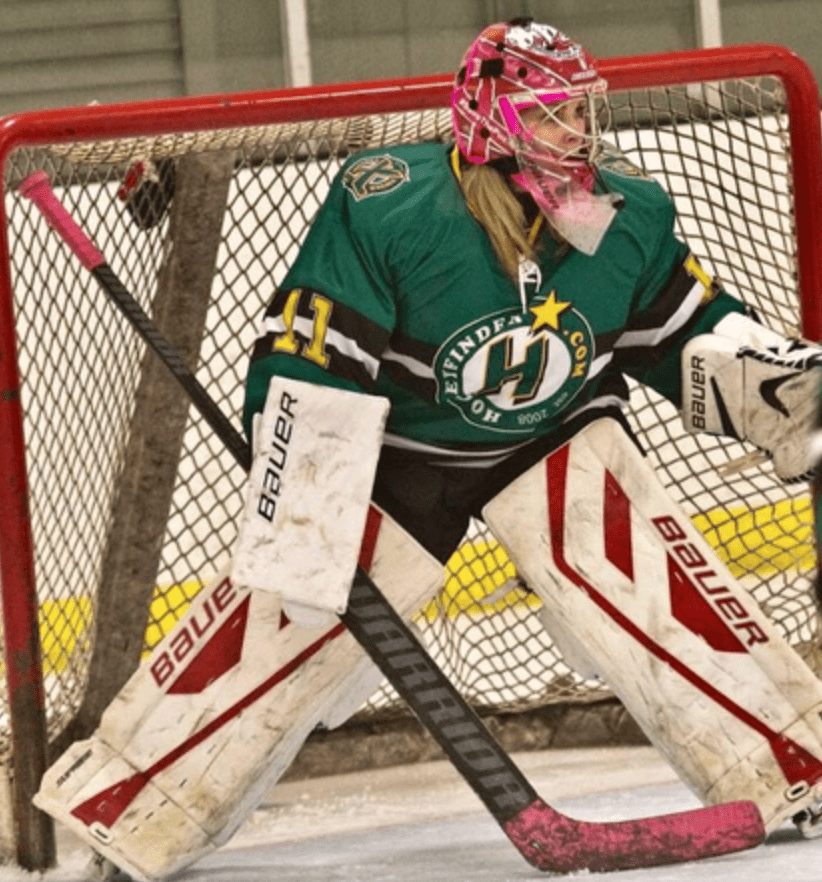 I will never forget how ‘Operation Hockey Mom who Plays Hockey’ started. I was 41 years old when it all began.  My son was in squirt hockey and I was sitting in the freezing cold yelling at him with the other hockey moms who were also yelling at their kids (Get the puck! Move your butt! Skate harder!!!).  After the game, he came up to me and said he could hear me when he was on the ice, but that it wasn’t fair for me to yell how to play hockey if I didn’t know how to play.  As much as I didn’t want to agree with him at the moment, he was right.  Not only did I not know how to play hockey, I didn’t even know how to skate.  So my natural response to him was ‘well then I guess I better learn how’.  Now mind you I’m a pretty stubborn person.  When I say something I mean it and this was no exception.  So I reached out to one of the hockey moms I sat with and asked her if she would try it with me.  Reluctantly she said yes and off we were.

First things first. I needed to learn how to skate.  This is where I realized how limited it was to find lessons for adults.  The options were 1) hire a personal instructor (hello money!) or 2) learn to skate (which is for kids 5 and older).  So being hockey moms with limited finances we chose the second.  We showed up to our first class and they were all 5 year olds.  I remember the looks on their parent’s faces when they saw Jen and I in the class (in fact if I remember correctly there were a lot of laughs and getting made fun of).  We pushed through our embarrassment and learned how to skate forward (without holding on to the boards), backward, stopping and the ever-so-difficult cross over.  Once we graduated from the class, we moved on to Adult Learn to Play hockey.  We were WAY out of our league because all of the participants were men (very large men), who had much more experience skating and had played some hockey prior to the class.  Once again we pushed through our embarrassment and completed THREE Learn to Play hockey sessions (4 week sessions) before we decided to join an adult league.  Once women started seeing what we had done, I was getting bombarded with other moms wanting to do the same thing.  The biggest obstacle was that they didn’t want to go through the steps we did because so much of it was intimidating.

So I approached one of my son’s coaches and asked if he would be interested in coaching a women’s only fundamental skate and learn to play hockey course.  Now we have a volunteer coach and ice time that Grover graciously offered to cap the cost at $10 per person regardless of how many women showed up.  I put out a post on Facebook to gauge interest and was flooded with women ready to hop on board.  Operation Hockey Mom was now in full swing.  Our sessions have beginners who haven’t skated to intermediate skaters who want to improve their fundamentals.  Women learn the rules of hockey, positioning and how to play all positions (goalie for the really brave).  This skate is females only (aside from our male coaches) because we wanted to foster an inviting environment surrounded by supportive women.  I didn’t have a love for skating out so I tried goalie and LOVED IT.  We had a volunteer goalie coach at all the practices to help with the basic fundamentals while the other volunteer coaches ran drills for the remaining skaters.

We are now in our 3rd year of Operation Hockey Mom and going strong.  We have had over one hundred women come to us and start playing hockey in some way, shape or form.  Long gone are the days where parents laughed at me for learning how to skate.  Now I’m playing goalie for some of the top teams and players in the State.  Not only did I learn an awesome sport, I lost over 50 pounds and was taken off all my blood pressure and depression medication. There is no age cap for learning how to play hockey and more importantly there isn’t a gender requirement.  If my story can inspire one mom/woman to step out of their comfort zone and find the love I have, then my mission is complete.  Hockey is a lifestyle for me now and I don’t know what I would do without it in my life.