“W is for Wickenheiser”: Inclusivity in hockey

Most kids learn the alphabet by learning that A is for “apple” and B is for “bear”. But if a kid happens to be growing up around the influence of a hockey fan, they will be taught that A is for “arena” and B is for “Bobby Orr”. Thanks to the children’s book “Z is for Zamboni – A Hockey Alphabet” by Matt Napier, kids can grow up learning about the ABC’s and about hockey all in one go.

I found myself at a bookstore recently, needing to pick out a birthday gift for a friend’s daughter. Yes, I’m the aunt who buys books rather than toys for kids who would way rather be playing with gadgets. When I stumbled upon “Z is for Zamboni” I started paging through it, more for my own curiosity. If this is how kids were learning about hockey, I wanted to make sure that the book was inclusive in both its words and illustrations. 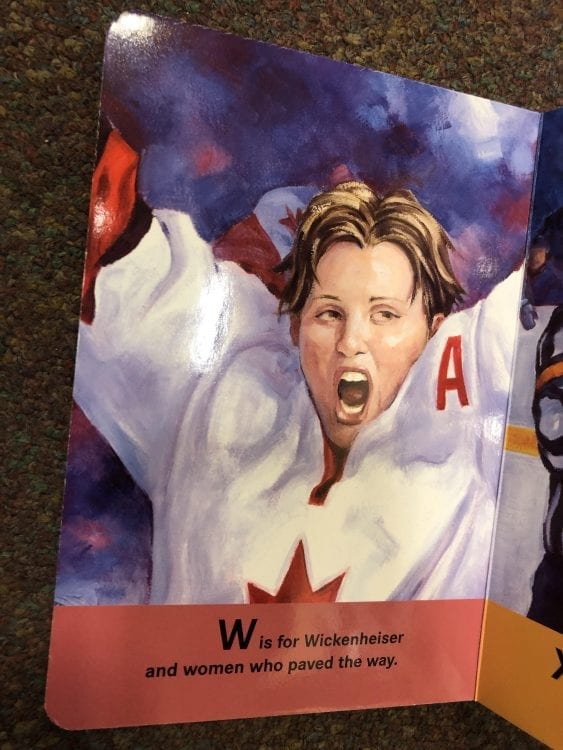 “W is for Wickenheiser and women who paved the way.” It’s safe to say, I had myself a moment of marvel at the “W is for” page in the middle of the Toddlers Books section of the store. This book is for kids aged 1-3. This means that kids today are being taught about the power and influence of women from the youngest of ages. Here’s why this is significant:

The girls needs to know

Girls today can walk into most hockey shops and help themselves to whatever equipment they need. There might even be some pink helmets and female-sized equipment for them. Girls know the names Wickenheiser, Poulin, Knight, and Kessel (most girls are surprised to hear that Amanda Kessel has a hockey-playing brother named Phil). Girls today don’t question their place in the game. This is a good thing. We don’t want them to ever think that they can’t or shouldn’t be playing hockey. But we don’t want them to forget the journey it’s taken to get to this place of belonging.

The boys need to know

Hockey is a male-dominated sport. It means that when a boy steps onto the ice, he doesn’t question his right to be there. But to truly appreciate the sport, they need to know that not everyone has always been free to pick up a stick. People of different races, genders, and backgrounds were and still are questioned about their ability to play the game. Knowing this will allow for them to be more supportive and inclusive when someone who is “different” from them joins their team. With more and more women entering the workforce every year, and with more of them achieving positions of leadership, more men are working closely with and reporting to female superiors. Learning to respect the power, knowledge and abilities of women from a young age will serve them well in a future that is predicted to be female-led.

The complexion of society evolves on a daily basis, and in the case of a country like Canada, the last few years have seen tens of thousands of people immigrate from other countries. Some of these countries have a very different definition of what it means to be a woman. As these families settle in to their new lives in Canada, their young daughters will learn what hockey is, what wrestling is, what rugby is, and they will come to their parents to ask if they can join their friends on the ice or on the field. Traditional values may prevent parents from encouraging their daughters to pick up a stick or to pursue whatever their passions may be. But knowing the story of why W is for Wickenheiser and all the other women may provide them with the courage required to buck gender and cultural norms.

The paving must continue

It wasn’t long ago that the namesake of the “W” page was having beers thrown at her because she was playing in a men’s league. Women’s hockey still is without a singular professional league in North America, in which their players can play, and be financially supported to play, on a daily basis. There is still much progress to be made, and the next generation of young players will soon be in a position to lead the charge. Knowing how far we’ve come should serve as a reminder of how progress can be made when people unite as a singular voice towards a common cause.

Inspiration to the world

The growth of women in sports, be it as athletes, coaches, broadcasters, or on the corporate side, is a microcosm of the growth of women in the world in general. The stories of successful women within the sports realm are abundant. From Billie Jean King’s fight for equality to females being named to the coaching staff on NBA teams, from women accepting head office roles in the four major sports to the emergence of the WNBA, from Kendall Coyne going toe-to-toe with the greatest hockey players in the world in a speed contest and rivaling their scores to the USA women’s soccer team’s fight for equal pay, the stories of these women can serve as inspiration to the world.

Why does W stand for Wickenheiser? What did she do? What did she fight for? How did she fight? And how can I follow in her footsteps? These are the questions we want girls and women to ask as they aim to carve out their own paths of progress.

The story of Hayley Wickenheiser and all the other women involved in the journey to grow women’s hockey is one that can help to inspire the next young hockey player, the next aspiring politician, the next hopeful astronaut. There are so many parallels between their stories and the stories of any other woman trying to fight for her place in the world. There are leaps forward and setbacks, supporters and naysayers, accolades and criticisms. And nothing happens overnight. Progress can be painstaking but knowing that the fight is for the greater good and being able to look back and see tangible gains makes the journey a beautiful one and one worth pursuing from A to Z.

Want to read about more women and girls in hockey breaking barriers?

Check out their stories on WHL People!

Jehan Jiwa
Jehan Jiwa
Jehan Jiwa
http://womensprohockey.blogspot.com/
Passionate about growing Women's Hockey & Women's Sports in Canada and around the globe. I believe the future is female and that we can empower girls and women through sport. Aspiring to own and operate a professional women's hockey team in Vancouver. Proud Canadian. Opinions are my own.
Previous Post
AMBASSADOR SPOTLIGHT: Krissy Draper | Ottawa, Ontario
Next Post
Gabby Wanchek | Abusive marriage | #WHLWarrior