I’ve said this many times this year that in 31 years of coaching hockey, this season was the most extraordinary and rewarding season of my career. We didn’t win championships. We didn’t finish over .500. We didn’t win any tournaments. We only won one league game of ten. But, for an “expansion team” in one of the toughest prep school leagues in North America, we battled every day, we worked hard every practice, and no matter the score we played right to the end of every game. Everyone bought into the concept of team. Were there some bumps along the way? Absolutely! But those bumps paled in the shadow of the success of the season in its entirety. 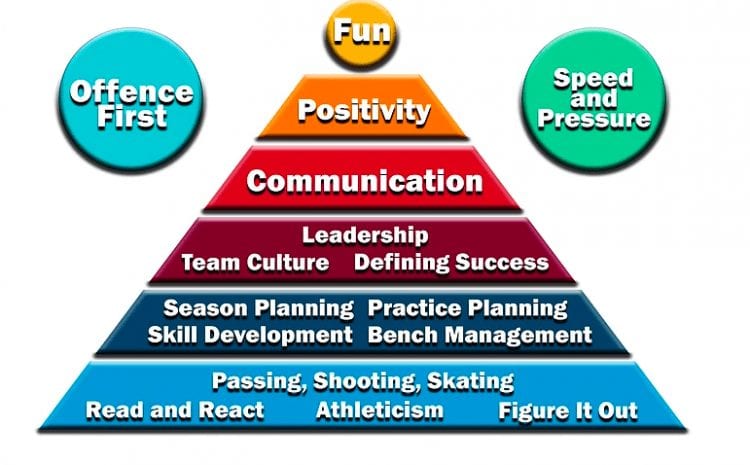 On day one after the team was selected, the players all came into the dressing room and received a t-shirt that was folded neatly on their stall bench. There were three separate elements to the t-shirt – first and foremost were the words “Offense First”. This was going to be our theme for the season. Although we would work on defensive play, and defensive individual and team tactics, at the end of the day we were going to be all out offensively all season. Two other elements of the t-shirt: at the top, “Just go score!” – something I say regularly to players on the bench, and in the middle of the shirt, “10-9”. I often told our players that “a 10-9 score is much better than a 1-0 score”. I know that this Offense First mentality resonated well with our players, gave us focus both in practices and games, and truly made us a better team by the end of the season.

But there’s more to the Offense First mentality than just trying to win hockey games. I am a firm believer that players develop more overall working on offense they do working on their defensive skills. Let’s face it, on offence you have the puck, on defence you don’t. The players that can put the puck in the net and are offensively talented are typically the ones that make the jump to the next level. Coaches always feel they can teach defense in 10 minutes to any player. It’s a much more difficult and lengthy process of coaching players to be better offensively. So, my season plan has the team working on offensive skills at the first practice of the year rather than putting together the defensive zone coverage system at that first practice. And I would hazard a guess that most coaches feel like they’ve got to take care of their own zone before taking care of the offensive zone.

What does Offense First actually look like? It looks like activating the defenseman into the offensive play, working on small area games on a regular basis, practicing the power play (or at least odd man play) at every practice thereby developing an offensive mindset, demonstrating and talking about good net front presence, and teaching and practicing individual and team tactics to generate more offensive scoring chances. Offense First also means letting players play, allowing them to take chances offensively, allowing them to be creative, allowing them to make mistakes in the offensive zone and learning from it. Don’t get me wrong, we work on our defensive play. We work on individual skills and  tactics in the defensive zone as well as team tactics, but it’s not our focus. And although we weren’t a .500 hockey team, we scored almost four goals per game through 46 games. Why did we lose more games and we won? Simply, on most nights, we are out talented. But as we move from an expansion team and grow the program, the strides we’ve made with our Offence First mentality this year will bode well for our future.

I only totally lost my temper with the team once this year. It was maybe the fifth or sixth practice of the season and we were just going through the motions, not working very hard, and certainly not playing at full speed. I had one of those “bang your stick on the ice”, “shoot pucks in the corners”, “scream and yell the top of my voice”, “maybe say a few swear words” melt downs. But I was clear to the team that if we don’t practice at full speed we won’t play games at full speed and we will lose every game this season. I know that probably sounds a little harsh but it was pretty much the truth. And from that day on, I can confidently say that the team played full-speed the rest of the season (which says a lot more about the character of the players on the team than it does about my ranting and raving at center ice that day).

Our second theme for the season was Speed and Pressure. Again players came back from their Christmas break with a t-shirt sitting on their stall bench. The T-shirt had a big Speed and Pressure on it and although we spoke quite a bit about Speed and Pressure in the first half of the season, it was going to become a big part of who we were in the second half. And by speed I mean “playing fast” not just skating fast. While I watch the Bruins play the Leafs in the first round of the playoffs right now I can’t help but be amazed at the speed at which all the players play the game. And it’s not just getting up and down the ice. It’s their passing, their shooting, their defensive play – it’s all done so fast and at full speed.

Pressure for me is to always take away time and space when the other team has the puck. I don’t want my players puck hunting – in other words, looking to intercept passes. I want my players putting pressure on the puck carrier and forcing bad passes, forcing turnovers, forcing bad plays. I remember as a player at the University of Toronto we played the tournament game against the University of Manitoba and lost badly – I think the score ended up 7-2. What struck me about the game was that it felt like Manitoba had seven players on the ice all game. They were literally all over us every time we touched the puck. I remember it feeling like the longest 60 minutes I’d ever played. But the experience stuck with me. I want my players to play like Manitoba did in that game, make the opposition feel like we felt – like there are seven players on the ice playing against us all game.

So how does this all fit into the coaching pyramid? I wanted to include my themes, separate from the actual pyramid. Themes that shape everything we do. Communication, Skill Development, Figure It Out, Season Planning, etc. – everything in the pyramid is influenced by the three circles at the top. Obviously, the most important one is Fun and then for me, Offence First and Speed and Pressure. I encourage coaches to put their own themes into the top left and right circles and let those things influence everything we do as coaches all season.

Rick Traugott
Rick Traugott
Rick Traugott
Rick Traugott is a lifelong coach who has been working with young athletes in many sports for the past 38 years. Since the 2010-11 season, Coach Traugott has been working with Canada's National Women's Team hockey program serving in a number of roles including camp coach with the U18 and development teams, and Video Coach with the U18, Development and National Women's Teams. Rick was a member of the staff that won a gold medal with the U18 team at the IIHF World Championship in Budapest, Hungary in 2014 and a silver medal with the NWT at Worlds in Malmo, Sweden in 2015 and bronze with the U18 team in 2018 in Dmitrov, Russia. Coach Traugott's resumé includes coaching the Varsity boys and girls programs at Trinity College School, Ryerson University men's team, Wexford Raiders Tier 2 Junior A, Wexford Raiders Minor Bantam and Midget AAA, as well as the Brampton Thunder of the CWHL. He also served as Video Coach and Team Leader for the uSports Women's Team that competed at the 2017 Winter Universiade in Almaty, Kazakhstan where the team won a silver medal. This season, Coach Traugott is back behind the bench with the Trinity College School Bigside boys' team as they move back to the top division in the CISAA (Conference of Independent Schools Athletic Association).
Previous Post
RECAP: 2019 IIHF Women’s Challenge Cup of Asia
Next Post
Ambassador Spotlight: Mia Macpherson | Kitchener, Ontario 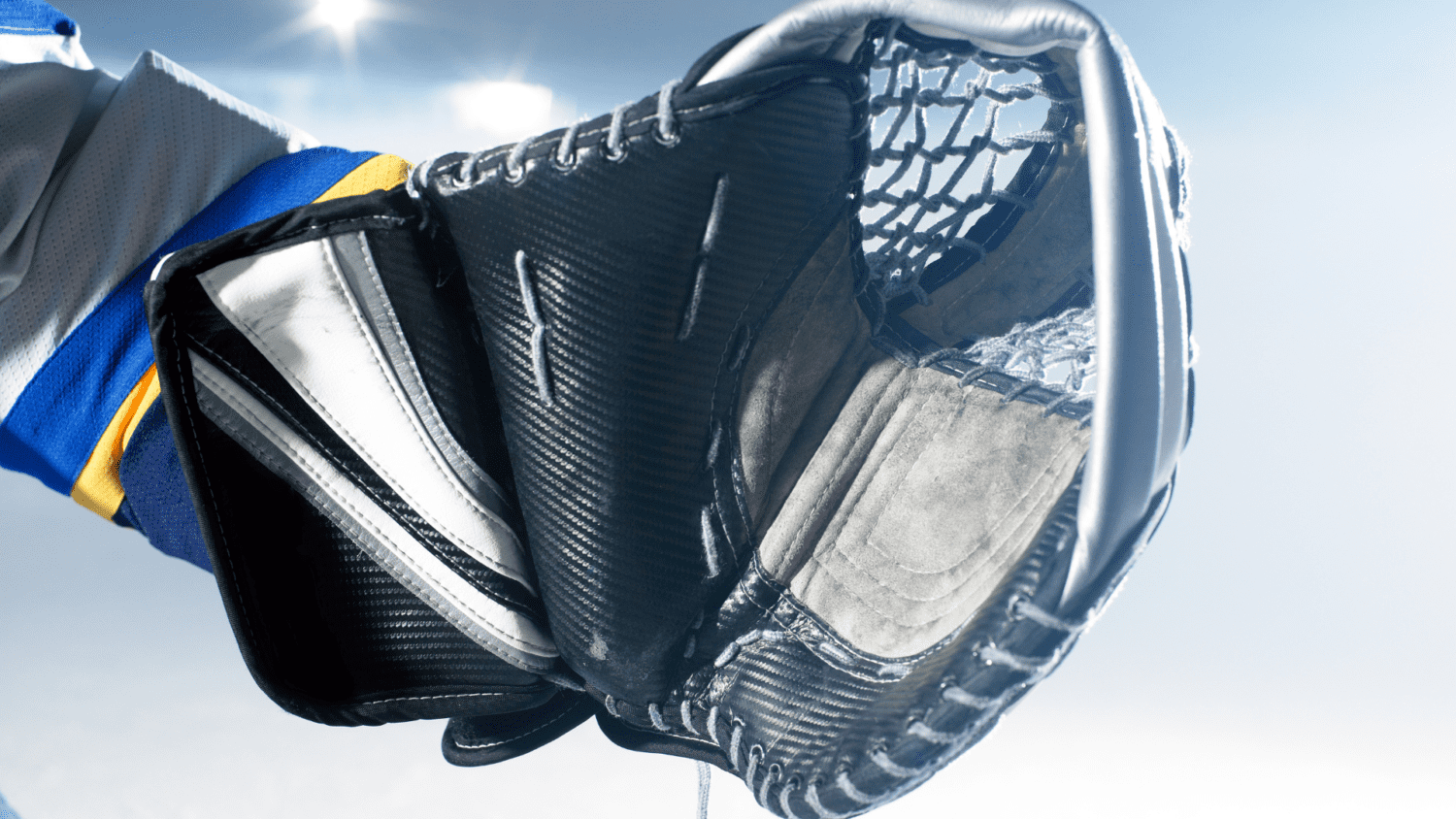