Carolyn Waldo was Canada’s top synchronized swimmer through the 1980’s. She won world championships, and Olympic and Commonwealth games Gold Medals. A silver medalist at the 1984 Olympic Games, Waldo was the favourite for a gold medal in 1988 in South Korea.  At a pre-Olympic competition six months before the Games, a reporter from the Toronto Star had asked Waldo’s coach Debbie Muir what she thought about the pre-Olympic competition and its importance going forward to the Olympic competition in Seoul. Muir replied that it was very important because “the judges are going to use this going into the Olympics as a preconceived idea of who is the best, so our goal is the win this pre-Olympics meet.” Unfortunately, Waldo lost and finished second. Later, the reporter asked “You know, three days ago you told me it was most important to win this competition and you didn’t, so what do you think now?” Muir responded, “Well, you know, it’s really important that we lost because if we hadn’t, we would go into the Olympics thinking we were the greatest (and be overconfident).”

I love this story. It is a perfect example of “reframing” – the ability to find positives in negative situations. This year, my team lost a 19-6 game against the top prep school team in our league (and arguably the country). For me, this was an important step in the development of our team. Sometimes a good setback creates tremendous growth in an individual or a team. The two takeaways for my team from this horrible loss? First, we scored six (we had a team goal of 3.7 per game). Second, we had video evidence (which I shared!) that showed if we played our positions better (correctly?) we would have been much better in keeping the goals against down. I argued to the players that all but three goals against were the result of poor decision making rather than being out-talented. Again, these are two great ways to reframe a negative situation into a positive one.

Last week I wrote about fun – the lens through which we can look at all we do when we are coaching. This week, I am introducing the next two levels of my Coaching Pyramid – which in many ways go hand in hand. 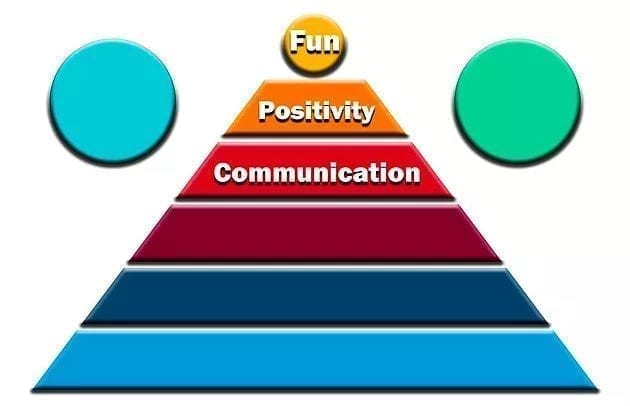 I am a pretty positive guy. I like to joke that “my glass isn’t only half full, it’s actually three-quarters full”. Don’t get me wrong, there are days when I feel like my head is going to blow off because something is bothering me so much but, I absolutely do my best to bring positivity to the rink every day. It starts with smiling at my players when I see them come into the rink, asking how their day was when we first get on the ice to start practice, telling them when they do something well in a drill, patting them on the back when they perform a small thing in a game that we worked on in practice – even sending a group chat message telling the team how proud I am of them after a game, even when we may not have won. I am insufferably positive on the bench during games. I want to be my players’ biggest cheerleader. Even when a player is having a bad game, my communication goes something like “I have seen you play better than this. Go out and have a great next shift.”

Communication (the next level in the pyramid) supports all the positivity. For me, communication comes in a multitude of forms and is delivered in many ways. Keeping in mind I have high school athletes, here is a list (from the macro to the micro) of things that I do to communicate effectively with my team “community” and support a positive environment:

1) E-mail a PDF’ed weekly schedule and updated game/result schedule to my entire team community (players, coaches, athletic director, key teachers, parents, etc.). Post the schedules to all relevant websites for easy access and send the schedule to all players through our group chat (we use WhatsApp).

2) I will typically write something in the e-mail about the past week, what we have been working on and what our on ice focus has been, and what the week ahead looks like. In that e-mail I will give reminders as well (“need meal money”, “bring your passport for the game in Buffalo”, etc.).

3) For practices, I post the lineup (jersey colour) and practice plan on the back of the dressing room door.

4) I have bi-weekly “leadership team” meetings (captains and a few other seniors). This meeting is meant to be a two way dialogue where I can ask for their support on a few items (e.g. tightening up dress code, keeping the dressing room tidy) and they can, in turn, voice some concerns about whatever they wish. They know this is a safe space for them to be honest with me. I am happy to push back on their concerns, I am also happy to say “let me think about that” or, sometimes it’s just “done”. In our first meeting this season one of my captains said, “since you are printing off the practice plan and posting it on the glass for you when we are on the ice, how about printing off a second copy and posting it in the dressing room?” Done!

5) If there are issues (with/from a player or a parent) I try not to discuss the matter over electronic communications. I always like to meet in person or, I know it’s old fashioned but, I pick up the phone and call.

6) I try to connect with every player on the team every day. Even if it’s just an eye contact “hello”, the message is positive and it lets players know they mean something.

Two more levels of my Coaching Pyramid – positivity and communication. They certainly go hand in hand but, these two pieces cannot be overlooked or neglected. The success of your team depends on these two things.

A quick personal note: I have really enjoyed fleshing out my Coaching Pyramid over the past few months. I think it’s a strong visual and once we get to the end of this series of posts it will fit in nicely with season planning and maybe changing the way we approach coaching a group of athletes. The blog series isn’t really a terrific place to explain all the pieces to the pyramid (it’s a little brief!). My hope is to get through each level in this format then expand the concept to a new eBook that will include a narrative from this past season but also include drills, team tactics and systems that we used throughout what became one of the most transformative seasons of my coaching career. That said, your feedback is much appreciated and I am happy to receive any comments at [email protected]

Rick Traugott
Rick Traugott
Rick Traugott
Rick Traugott is a lifelong coach who has been working with young athletes in many sports for the past 38 years. Since the 2010-11 season, Coach Traugott has been working with Canada's National Women's Team hockey program serving in a number of roles including camp coach with the U18 and development teams, and Video Coach with the U18, Development and National Women's Teams. Rick was a member of the staff that won a gold medal with the U18 team at the IIHF World Championship in Budapest, Hungary in 2014 and a silver medal with the NWT at Worlds in Malmo, Sweden in 2015 and bronze with the U18 team in 2018 in Dmitrov, Russia. Coach Traugott's resumé includes coaching the Varsity boys and girls programs at Trinity College School, Ryerson University men's team, Wexford Raiders Tier 2 Junior A, Wexford Raiders Minor Bantam and Midget AAA, as well as the Brampton Thunder of the CWHL. He also served as Video Coach and Team Leader for the uSports Women's Team that competed at the 2017 Winter Universiade in Almaty, Kazakhstan where the team won a silver medal. This season, Coach Traugott is back behind the bench with the Trinity College School Bigside boys' team as they move back to the top division in the CISAA (Conference of Independent Schools Athletic Association).
Previous Post
WEEKLY RECAP: Women’s Hockey Life Talk – March 18-24
Next Post
Lauren Patterson | Philadelphia