Among the most likeable players during the CWHL’s decade-plus existence, Allyson Fox brought heart, tenacity and leadership in every season that she graced league ice. A former three-time OUA All-Star with the York University Lions, Fox, whose hockey journey stretches back to her teens, competing for the Toronto/North York Aeros of the former Central Ontario Women’s Hockey League (COWHL), also enjoyed a sterling run with the Brampton Thunder, skating for the club in both the original NWHL, and the eventual CWHL.

In all three leagues, Fox amassed a cumulative total of 528 games played, one of the most impressive totals in modern club play. Of note, 446 of those games took place in the Thunder jersey, the highest in franchise history. Placing her in the same rarified air as the likes of other Thunder luminaries such as Lori Dupuis (379 games played), Jayna Hefford (388 games played) and Vicky Sunohara (285 games played), Fox’s perseverance, loyalty and commitment ensured that she was also destined for a greater place in the female game’s lore. 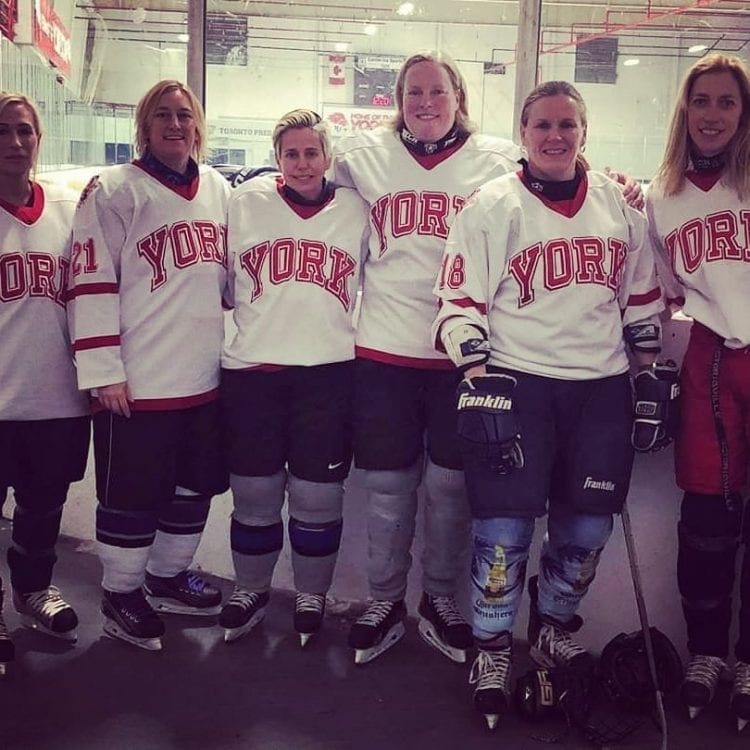 A member of the CWHL’s Sensational Seven, which includes Lisa-Marie Breton-Lebreux, Jennifer Botterill, Mandy Cronin, Kathleen Kauth, Kim McCullough, plus Sami Jo Small, the phenomenal gathering of pioneering players transformed the league from concept to reality, elevating them to a treasured place among the game’s builders. Despite the fact that Breton-Lebreux and Small would be the final founders to play in the league, the inaugural CWHL All-Star Game serving as their last collaborative highlight, the fact that such an event occurred on NHL ice, including network television coverage, it represented a key victory, part of an evolution which fascinated Fox.

Throughout the years of such growth, the concept of collapse was certainly unforeseen. While the eventual closure of the league sent rippling shockwaves throughout the Canadian sporting conversation, that feeling of loss was understandably more profound for Fox and her fellow co-founders. Preferring to see the unfortunate final chapter of CWHL hockey as a bridge towards a new narrative, perhaps one destined to raise the women’s game to greater heights, the development of the league certainly demonstrated the potential.

“I definitely was proud to see it grow. It grew in fits and starts, and I do not think any of us knew where it was going to go when we started it. The league provided the best place for female hockey players to play at the time. Anytime something that you helped start ends, there is a bit of sadness. Yet, I truly believe the end of the CWHL was necessary in order to let the game grow and to get the players what they really deserve, which is a professional league and to be paid as professionals.”

Although every CWHL contest resulted in an opportunity to appreciate the contributions of Fox and the other members of the Sensational Seven’s efforts in women’s ice hockey, no game was greater for Fox than the inaugural CWHL championship game. Facing off against Small’s Mississauga Warriors, a roster which also featured the likes of Sommer West, it was fitting that overtime would be required to determine the league’s first champion, testament to the quality of talent. With Molly Engstrom recording the championship-clinching goal to bring a glorious end for the Thunder in a highly intense affair, it also provided Fox with the only title of her CWHL career. 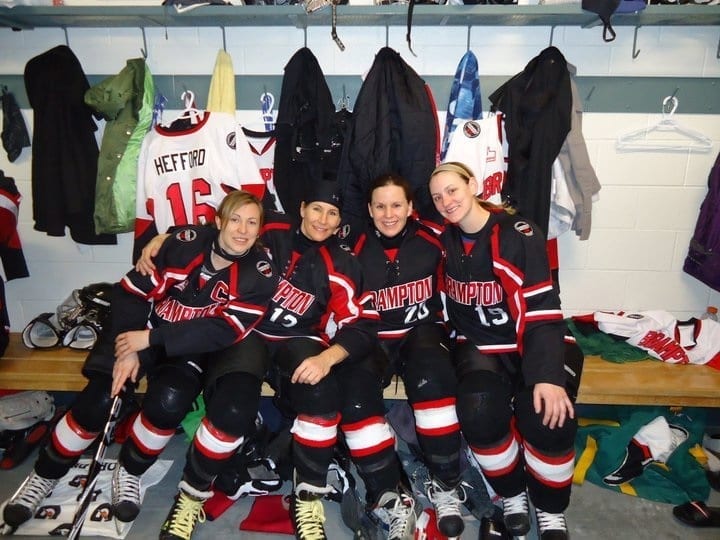 While a pair of appearances in the Clarkson Cup Finals would follow, a tinge of sadness accentuated the fact that Fox’s final appearance in the 2012 Finals served as her last hurrah. Fittingly, Fox’s final goal, scored at the 2012 Clarkson Cup round robin in Niagara Falls, would take on heroic stature.

Challenging the Toronto Furies in the final game of the round robin, the March 24 affair saw Fox score against Erika Vanderveer at 17:46 of the second period, with assists credited to Ashley Riggs and Lori Dupuis for a 3-0 advantage. With Toronto roaring back, closing the gap at 3-2 during the third, Fox would reciprocate, assisting on Dupuis’ goal in a 4-2 final, as Fox’s goal stood as the game-winning tally, allowing the Thunder to qualify for the Finals. As a side note, her final regular season point would take place on February 25, 2012, collaborating with Britney Selina on the game’s first goal, scored by Jayna Hefford, in a 5-2 victory versus the Burlington Barracudas. 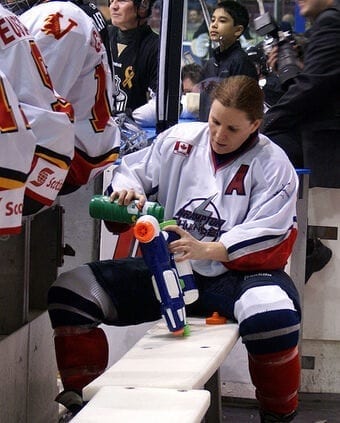 Suiting up for the Thunder during their first five CWHL seasons, the feeling of allegiance for Fox never wavered after the franchise relocated eastward to the city of Markham, site of the Clarkson Cup Finals from 2013-15. Considering that so many of the Thunder’s highly dedicated and commendable volunteers also followed the franchise from Brampton, it solidified one of the most remarkable team cultures in all of hockey.

Undoubtedly, such loyalty was prevalent when the Markham Thunder qualified for the 2018 edition of the Clarkson Cup Finals. Although Fox’s athletic identity is best defined by her time in Brampton, highlighted by the Abby Hoffman Cup in 2006, plus the highly emotional, and historic, championship from 2008, she was proudly joined by numerous Thunder alumnae, including Dupuis, who served as General Manager for a handful of seasons, at Toronto’s Ricoh Coliseum for the Finals.

Taking into account that it marked the Thunder’s first trip to the Finals since 2012, a game that shall always hold tremendous meaning and significance for Fox, dynasty and destiny collided on this day. Viewing the Thunder defeat the expansion Kunlun Red Star in a highly competitive affair which required overtime, providing feelings of déjà vu, rekindling memories of that first CWHL championship. With third-generation skater Laura Stacey scoring against CWHL Goaltender of the Year Noora Raty, capturing the first Clarkson Cup in franchise history, she elevated herself into the same celebrated sphere as Molly Engstrom, whose goal 10 years earlier placed the Thunder into the championship summit.

Considering that more than half of Markham’s championship roster began their professional careers in Brampton, the connection to that community remained very strong. That sense of community was just as relevant for Fox. Among the holdovers from Brampton garbed in Markham green was one whom Fox not only called a teammate, but also played an historic role in her last game. Goaltender Liz Knox, the owner of numerous Thunder goaltending records, made history as the first rookie goaltender to start a Clarkson Cup, achieving the feat in 2012 versus Montreal. Indubitably, Fox was ecstatic that the retired players who represented the Thunder during their Brampton era were on-hand showing their support, fuelling the sense that it was a shared victory for all who skated for the franchise during their competitive careers.

“I thought it was so great! Some of my best and longest friendships came from the Thunder, so we were all very happy to cheer them on and watch them win. It was such a great group of women, and I am proud of both the traditions we were able to establish in the Thunder and the new levels that the team reached.”

The feeling of unity during that magical spring in 2018, rekindling so many fond memories, simultaneously marking a proud affiliation that comes from donning the Thunder’s colors, whether it was from their red and black era, the silver and black seasons, or the definitive Markham Green, actually served as prologue for Fox. As November approached, Jayna Hefford, the Thunder’s all-time leading scorer, whose 636 professional points represents a Canadian franchise record, quite possibly one of the safest records in women’s ice hockey, gained entry into the Hockey Hall of Fame.

In attendance for Hefford‘s induction ceremony into the Hockey Hall of Fame, only the sixth woman to gain induction, part of a Class which included Martin Brodeur, Gary Bettman, Willie O’Ree, Martin St. Louis and Alexander Yakushev, it represented an unbreakable bond of friendship and mutual respect between Hefford and Fox. Although Hefford’s four fantastic gold medals in women’s ice hockey at the Winter Games remain her signature achievement, the body of work with the Thunder was just as important, definitely stirring very powerful feelings of Thunder pride for Fox and other former teammates on hand.

Worth noting, Fox’s career has also resulted in a celebrated status among her peers, earning a well-deserved place in the York Lions Athletics Hall of Fame. Recognizing a sensational career at the university level, in which she called the likes of Dupuis and Hefford as rivals, both skating for the University of Toronto Lady Blues, the induction night also accentuated the theme of full circle. Of note, former Lions teammate Debra Ferguson, who once recorded 63 saves in a game against the Lady Blues which spanned eight periods, not only provided commentary for Fox’s induction video, she was also an alum from the COWHL.

Both events served as a tremendous validation of the valiant efforts of the wondrous women who grace the frozen perimeter. Certainly, the prevailing theme among Fox’s recollections of each ceremony was defined by fun, celebration extending beyond the on-ice efforts, but the substance of the game built on values as friendship and unity, also the pillars of any player’s career.

“It was a really cool night. Jayna was always such a quiet superstar, and it was just so heartening to see her honoured for all that she has accomplished, and for her to have her family and friends around to celebrate her.

The York Hall of Fame is a really proud achievement, and I really enjoyed that I got to celebrate it with my teammates. There was a great crowd of my former hockey and soccer teammates at the awards night, and it was just a fun night, and a throwback to our university days, complete with an after-party in my parents’ basement.”

Undeniably, numerous roles can classify Fox. From a builder of the game, as evidenced by her pioneering place in CWHL lore as one of its co-founders, to an invaluable team leader in Brampton, and most importantly, a highly dedicated athlete and devoted friend, Fox left a positive impression on so many. Although the concept of how Fox would like to be best remembered for her time in the CWHL conjures up many emotions, her humility shines, displaying an approach that always benefitted the game and team first, testament to a kind and generous individual,

“I have never put much thought into that. I guess I would like to be remembered as a good teammate, and as someone who was passionate about women’s hockey.”

Raised in the Greater Toronto Area, Mark holds an extensive writing background. A contributor to Wikipedia since 2007, his writing endeavors have included writing for Bleacher Report (2012-13), and the former CWHL (2012-15), and the Canadian division of the Legends Football League (2013-14). Also part of the team of writers for Hockey Canada at the 2013 IIHF Women's World Championships in Ottawa, Mark contributed features on Jenny Harss, Elin Holmlov, Iya Gavrilova, Kathleen Kauth, Lucie Povova, Alex Rigsby, Julia and Stephanie Marty, and Katie Weatherston, among others. In addition to composing more than 700 articles for Women's Hockey Life (since 2012), his current slate of duties includes covering female tackle football for Canada Football Chat, along with pieces for NowVIZ Magazine (digital format) since its inaugural issue. Also the publisher of allowhertoplay, a website devoted to the heroics of sporting heroines, Mark remains focused on raising awareness of the positive impact of women in sport.

Adjusting to life without hockey