Among the unique storylines that defined the Boston Pride’s path to the 2021 Isobel Cup, becoming the first team in PHF history to win twice, the most prevalent was one of patience. Having qualified for the 2020 Cup Finals, the event shelved due to pandemic concerns, the wait provided a highly cherished reward.

Before facing off for their seventh season, the Pride hosted a championship ring ceremony for their jubilant players at Boston’s Legacy Club. Beautifully crafted by Legend Rings, with a remarkable attention to detail, the colorful Pride logo centered in the lavish and elaborate design commemorated a proud achievement.

Representing a highly cherished special occasion, this kind show of gratitude was resonant among its wondrous players. Proudly serving in the role of team captain, Jillian Dempsey, the league’s all-time leading scorer, is the heartbeat of the Pride.

Having been at the pulse of all the monumental moments in franchise lore, Dempsey also scored a goal in the Cup final versus the Minnesota Whitecaps. For the celebrated captain, the ceremony encompassed a feeling of glorious reunion, providing the consummate captain with another highlight.

“Seeing the rings for the first time was an incredible moment! I absolutely love the intricate detail. It was an enjoyable evening celebrating our championship together again.”

Adding luster to the proceedings involved the presence of Denna Laing. Although Laing’s career ended far too quickly, she holds a cherished place in the hearts of all who have worn the Pride black and gold colors. With an inspiring presence and constant smile, Laing’s influence is one that remains prominent for the franchise. 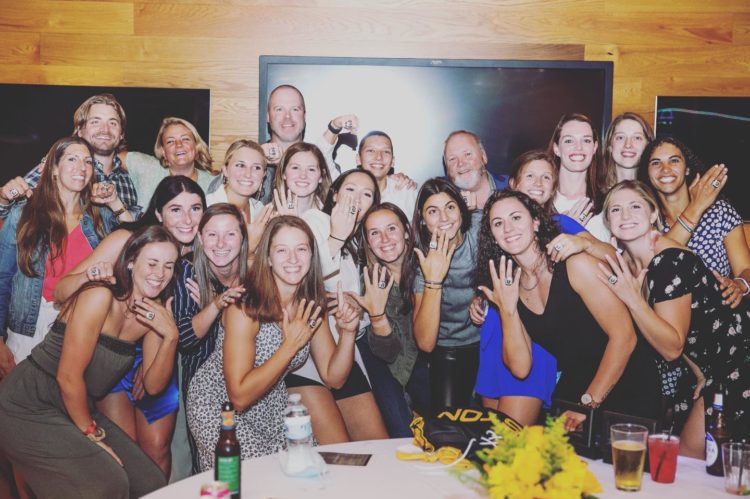 A teammate of Dempsey’s with two different Boston-based hockey teams, winning championships with each, both were also raised in Massachusetts. With an unbreakable bond of friendship and mutual respect that quickly developed in their professional sojourn,

“Denna is one of my close friends, and she’s been an integral part of the Boston Pride organization since Season 1. Having her present at this event for the presentation of our rings made it that much more special.”

Another key figure was also on-hand, embodying the spirit of leadership and teamwork. Having engaged in many roles with the Pride, from the first general manager in franchise history, also admirably filling in as an emergency player during the inaugural season,  Hayley Moore even served in the role of Deputy Commissioner.

Enjoying an exciting new role with the American Hockey League, this past season saw the highly affable Moore fill the role of Team President, her last with the franchise. Appearing at the ceremony, it served as a fitting conclusion to her glorious swan song.

Joined by outgoing General Manager Karilyn Pilch, the two posed for pictures with players, representing a touch of class. Moore holding the jersey while the ring in Pilch’s hands; it made for a highly positive impression. Standing as a poignant moment for Lauren Kelly, who played her NCAA hockey with Boston’s Northeastern Huskies, the privilege of playing professionally in the same city took on a new meaning with Moore as an invaluable mentor and inspiration.

“Hayley Moore has done so much for women’s hockey. It was truly an honor to learn from her these past couple of years and witness her dedication first hand. Her work ethic and love for the game is unmatched. Winning the Isobel Cup her last year with the NWHL and having her time with the Pride come full circle was the only fitting ending!

My favorite part of the ring is all of the little detail they put into it! Legend Rings did an amazing job capturing our team and the city of Boston within the ring, and I am honored and proud to have such a beautiful ring!”

Part of a new generation of elite hockey talent for the Pride, Jenna Rheault, a blueliner who skated for the University of New Hampshire Wildcats, has enjoyed 27 regular season appearances with the franchise. Logging an assist on Sammy Davis’ goal in the semi-final win versus top-ranked Toronto, she has quickly matured into a defensive stalwart.

With the commemorative receipt of the ring, the magnitude of the Isobel Cup triumph took on a new meaning. Affirming her arrival as a professional athlete, elated at the prestige of such a prized achievement, Rheault’s reflections encompass a sense of unity.

The ceremony representing a proud reunion among its victorious players, the ring shall always provide Rheault with a sense of residual warmth, a continuous display of the essence of perseverance and character, qualities that helped define the Pride’s path to the Isobel Cup.

“It was a great feeling to celebrate our Isobel Cup championship with a ring. The ring was beautifully constructed and the event was very well done. Each member of the team was individually honored for their efforts and recognized for their contribution to our championship.

What I enjoyed the most about the ring ceremony was being able to have everyone all together again. We have not been able to truly celebrate with everyone together since the pandemic and I am very thankful we were able to do so in a safe way! This championship team had so much dedication and heart and this ring will always remind me of that.”

Mark Staffieri
Mark Staffieri
Mark Staffieri
Raised in the Greater Toronto Area, Mark holds an extensive writing background. A contributor to Wikipedia since 2007, his writing endeavors have included writing for Bleacher Report (2012-13), and the former CWHL (2012-15), and the Canadian division of the Legends Football League (2013-14). Also part of the team of writers for Hockey Canada at the 2013 IIHF Women's World Championships in Ottawa, Mark contributed features on Jenny Harss, Elin Holmlov, Iya Gavrilova, Kathleen Kauth, Lucie Povova, Alex Rigsby, Julia and Stephanie Marty, and Katie Weatherston, among others. In addition to composing more than 700 articles for Women's Hockey Life (since 2012), his current slate of duties includes covering female tackle football for Canada Football Chat, along with pieces for NowVIZ Magazine (digital format) since its inaugural issue. Also the publisher of allowhertoplay, a website devoted to the heroics of sporting heroines, Mark remains focused on raising awareness of the positive impact of women in sport.
Previous Post
First day of sledge hockey practice
Next Post
Heritage and giving back key cornerstones for Jana Headrick